Among the top 10 colors for women’s fall 2013 fashion reported by Pantone, the world’s authority on color, is Acai (pronounced ah-sigh-ee). It was inspired by the acai berry from Central and South America. This exotic, rich purple, according to the Pantone Fashion Color Report Fall 2013, “adds mystery and richness to the palette, and can be incorporated with the other colors to create a number of powerful fall combinations”.

So let’s take a look at the gemstone that exudes this royal hue – amethyst – and its use in vintage costume jewelry. You’ll find a selection of amethyst pieces from the 1920s through the 1950s on the TruFaux Jewels website. See my Pinterest board for images of the color purple in vintage and contemporary fashion, art and the decorative arts.

Gemstones are natural minerals. Amethyst is a transparent variety of crystalline quartz that occurs in shades ranging from deep purple to pale bluish-violet to lilac or mauve. The color largely depends on the stone’s origin. Amethyst is dichroic, which means that it shows two or more colors – in this case a bluish or reddish tint – when viewed from different angles. Siberia is known for the finest stones (those with a reddish tint); one of the largest deposits of amethyst is in Brazil. Amethyst is the birthstone for the month of February.

Amethyst derives its name from the Greek word amethystos, which means sober, as the ancient Greeks believed the stone would guard against intoxication. Amethysts were used by ancient Greeks and Romans for intaglio seals. Because the color purple is associated with royalty, many amethysts are present among the crown jewels of countries such as Britain and Russia. The stone has also been “favored by the Church for bishops’ rings and pectoral crosses”, according to John Benjamin (author of Starting to Collect Antique Jewellery).

Synthetic amethysts are artificial, man-made stones that have the same appearance, chemical composition and physical characteristics as natural amethysts. Synthetic amethysts often easily pass for genuine ones, especially if the stones are free from inclusions.

Imitation amethysts are also man-made to imitate the appearance of natural amethysts, but imitation gemstones have different physical characteristics and chemical compositions than their natural or synthetic counterparts. Imitation amethysts – known as rhinestones, strass and paste – are what we see in costume jewelry. They have been produced from glass for centuries.  During the 1920s through the 1950s, the decades of interest to TruFaux Jewels, Bohemia (today’s Czech Republic) and Austria were the main sources of imitation amethysts for costume jewelry production.

Faceted amethyst crystal beads that formed necklaces of various lengths as well as pendant earrings were very much in vogue in the 1920s and 1930s. The amethyst beads were often alternated with clear crystal beads or had faux pearl accents. Another style of necklaces, bracelets and earrings, which we now call chicklets (faceted colored crystals or glass stones set in metal), was known as channel jewelry  (spelled chanel at the time). This photo shows a close-up view of the amethyst chicklets on an Art Deco necklace, which can be seen here on the TruFaux Jewels website. 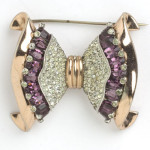 Retro Modern costume jewelry of the 1940s is characterized by bold, large-scale and three-dimensional  pieces plated in rose, yellow or green gold, in imitation of precious jewelry. Amethysts were among the most popular gemstones of the era,  often square- or step-cut in a rectangular shape (also called emerald-cut) and paired with smaller rubies, sapphires or diamonds as accents. Ribboned bows gathered in the center with jewels was the most popular motif in brooches in the 1940s. This piece by Pennino illustrates these characteristics of the Retro Modern style:  a large rose-gold-plated bow with faceted deep-purple stones and contrasting clear pastes. You can see detailed photos and a description of this piece here.

According to Antique Jewelry University (www.langantiques.com/university), the motifs of 1950s jewelry were similar to those of the Retro Modern style, but the former “were executed in an entirely different way. Retro jewelry had a solid, heavy and highly polished look whereas 50s jewelry was open, airy and textural.” Matching accessories were a trend in the 1950s; jewelry makers complied by producing matching sets of necklaces, earrings, brooches, bracelets and finger rings.  This amethyst and aquamarine rhinestone brooch and earring set by the second generation of Hobé designers is a great example of 1950s design. A complete description and detailed photos of it can be found here.

How to Wear December’s Birthstone: Turquoise

Spice Up Shades of Grey with Vintage Jewels

The History of Costume Jewelry: A Researcher’s Story