Compared to fashion innovators like Coco Chanel and Paul Poiret, whose names are still well-known today, Lucile (Lady Duff Gordon), a leading couturier in the Edwardian era, has nearly been forgotten. Thanks to a current exhibition at the Guelph Civic Museum near Toronto, fashion-history lovers can find out about her significant contributions to the evolution of 20th century fashion and see many of her revolutionary creations.

Lucile: Fashion. Titanic. Scandal. tells the story of the life and career of Lucy Duff Gordon, “the most significant fashionista of the Edwardian age” (according to Hugh Brewster, guest curator of the exhibition). She grew up in Guelph, Canada, established one of the largest fashion empires in the world, and survived the Titanic disaster. The downstairs exhibition hall shows a time-line of her life and includes ship relics. The upper hall exhibits 15 original gowns, which are very fragile and on loan from nearby universities and private collections, in a display that simulates her salon. 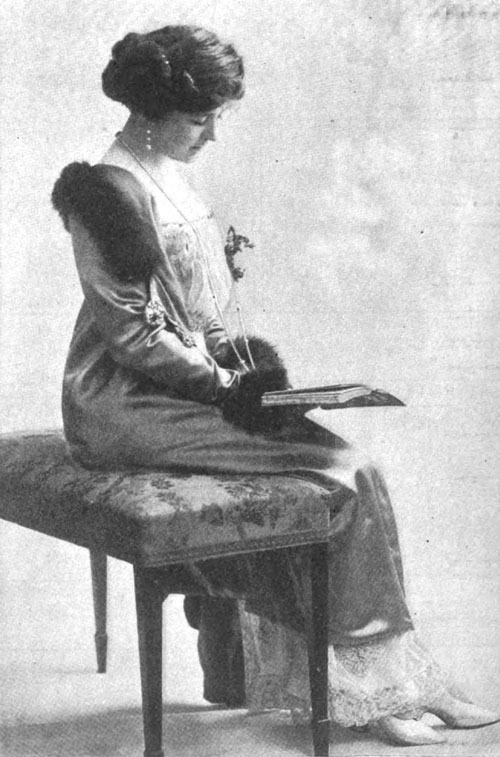 At a time when few women divorced, Lucile ended her marriage to an alcoholic and unfaithful husband. With a daughter to support, a talent for sewing, and an interest in fashion, she started her dress-making business from home in 1890 and soon moved to rented premises. She quickly broke the traditions of the Victorian silhouette’s rigid corsets and introduced sheer, sexy lingerie. When Poiret (who is credited with freeing women from corsets) created his hobble skirt (which was so tight at the bottom that the wearer could barely walk), Lucile added a slit.

Her feminine, yet seductive layered chiffon and lace gowns with detailed silk, flower, or beaded embellishments were coveted by society women, royalty, and stage and early film actresses. A 1910 article in Good Housekeeping said: “Lady Duff Gordon believes that a truly successful creator of dress must be more or less of a psychologist. She studies her patrons from their souls out, and tries to read their true character and to clothe them accordingly.” This writer suggested that instead of producing a collection of what fashionable women should wear, Lucile designed specifically for each individual client, to bring out her own beauty.

From her first rented premises in London in 1894, Lucile moved to 17 Hanover Square in 1897. By 1904, Lucile Ltd. was established at 23 Hanover Square in London (where it remained for 20 years), with branches in New York (1910), Paris (1912) and Chicago (1915). Lucile had become “one of the first Englishwomen to be recognized internationally as a dress designer” (according to Jane Mulvagh, in Vogue’s History of 20th Century Fashion).

In addition to her lingerie and evening wear, Lucile was best known for her tea gowns, which wealthy women wore without corsets in private while taking tea (and potentially entertaining lovers) in the late afternoons, before dressing for dinner. Unlike most of her peers, Lucile also designed costumes for the stage and screen, including the operetta The Merry Widow (on the London stage in 1907), Ziegfield Follies (on Broadway, 1915-21), and early silent films such as The Perils of Pauline (1914). She applied the principles of theatrical dress design – the layering of fabrics, combinations of color, and use of trim, to spotlight the performer – to her fashion creations.

The theatre also inspired Lucile’s presentation of her collections. She was one of the first couturiers to use live models (whom she personally selected and trained) in mannequin parades, a precursor to the modern runway fashion show. This photo from the August 1914 issue of Harper’s Bazaar shows a model presenting a gown on the stage of the London house. 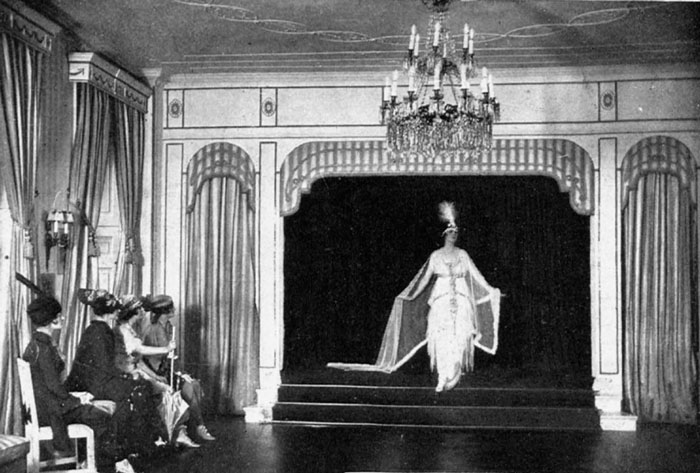 These invitation-only events featured tea, music and dancing, which Mulvagh refers to as a thé dansant, in her description of a 1913 fashion show reported in Vogue. There Lucile introduced a new silhouette for autumn – called the Tango frock – which was designed to allow a woman the freedom to engage in the latest dance craze while wearing a form-fitted, draped skirt with open sides over trousers (instead of a petticoat).

Lucile was also a pioneer in fashion marketing and merchandising. She lent her name to advertising for luxury apparel and beauty products, and designed interiors for limousines and town cars for the Chalmers Motor Company (now Chrysler Corporation). Her commercial undertakings included a licensing agreement with Sears, Roebuck & Co. in 1916-17 for a lower-priced, mail-order, ready-to-wear line. A talented writer, Lucile promoted her own collections and wrote about fashion in regular columns for Harper’s Bazaar, Good Housekeeping and Hearst newspapers. Vogue and other leading American and European fashion publications also wrote about her collections. These designs by Lucile were featured in her article “The Summer Frock Borrows Beauty from Bygone Periods”, in the June 1921 issue of Harper’s Bazaar. 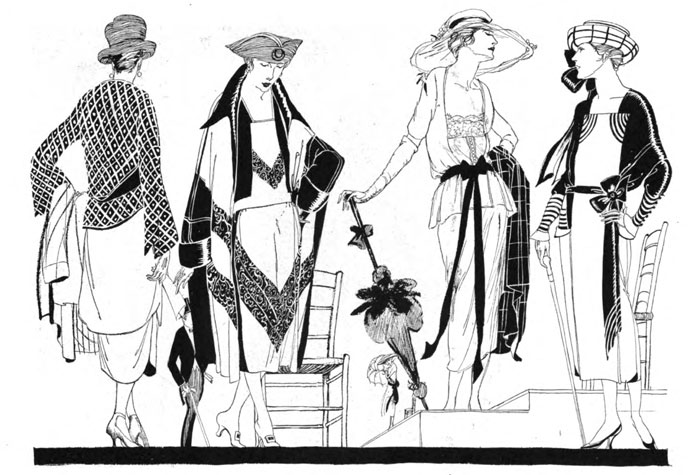 After World War I, Lucile Ltd. experienced financial problems, partly because of the recession in 1919 and partly because Lady Duff Gordon’s ultra-feminine fashions were not in keeping with the youthful, androgynous (flapper) silhouette of the 1920s. She ended her relationship with the firm in 1922 but continued to design for individual clients. She also continued to work as a fashion columnist and critic, and published her autobiography, Discretions and Indiscretions, in 1932.

The daughter of civil engineer Douglas Sutherland and his Anglo-French-Canadian wife Elinor Saunders, Lucy Christiana Sutherland was born in London, England, in 1863, and moved to Guelph, Ontario, after her father’s death. When her mother remarried in 1871, the couple took Lucy and her sister (the future novelist/screenwriter/film producer and director, Elinor Glyn) to live on the Isle of Jersey.

In 1884, Lucy married James Stuart Wallace; her daughter Esme was born the following year. Wallace was an alcoholic and unfaithful husband, and the couple separated around 1890. Their divorce was finalized in 1895. Lucy married Sir Cosmo Duff Gordon, a Scottish baronet in 1900. In 1912 they were en route to New York aboard the Titanic and were among the first-class passengers who survived the disaster. Rumors and scandal surrounded the couple because their lifeboat, which was designed to hold 40, carried only 12 passengers. The Duff Gordons testified at the British inquiry into the sinking. They were exonerated of any wrong-doing but remained tainted by the scandal. Lucy Duff Gordon died in a London nursing home in 1935.

Fans of Downton Abbey may have caught the reference to Lucile as the designer of Lady Edith’s wedding gown in her ill-fated marriage to Sir Anthony Strallan in Season 3. In an early scene in episode 3 (set in May 1920), when the house is being decorated for the lavish reception, Edith, her mother and grandmother are discussing the preparations in a sitting room. Here is the dialogue:

Lady Edith: The dress came this morning.
Lady Violet: I was rather sad you decided against Patou. I would have paid.
Lady Cora: Lucile was safer. We don’t want her to look like a chorus girl.

In fact, the gorgeous satin wedding gown Edith wore “was designed around an original train covered with flowers and crystals, with these motifs repeated on the gown,” according to Caroline McCall, the head costume designer for Season 3.

Lucile: Fashion. Titanic. Scandal. will be on display at the Guelph Civic Museum until November 13, 2016. Take advantage of this rare opportunity to see these beautiful Edwardian fashions. In addition, read Lucile – Her Life by Design: Sex, Style and the Fusion of Theatre and Couture by Randy Bigham, one of the exhibition’s consultants. You can order the book here.

How to Wear July's Birthstone: Ruby

How to Wear June's Birthstone: Pearl