One of my favorite aspects of my job is the constant opportunity to learn something new. Correctly interpreting the words and symbols on signed jewels is vital to my authentication process. Sometimes my research on a company name yields a surprise as well as significant insights relating to costume jewelry history. To help you in your vintage shopping journey, here are some examples that explain the complexities of reading symbols stamped on jewelry. In two cases, identical pieces bear different names. How is that possible? Read on to find out.

Two years ago I was adding a double clip brooch (now sold) to the boutique. It was marked “Ciro England Sterling”. Because I had not heard of this company, I needed information about it. What began as a straight forward research task turned into numerous days of trying to untangle the complicated web of Ciro’s history. Simply put – Ciro was and still is a retailer, not a maker.

The company was started in 1908 by Michael Joseph Goldman. Named Ciro Pearls Limited, it was a mail-order seller of imitation pearls. The name later became Ciro Pearls & Jewels (in the UK and Europe) and Ciro of Bond Street (in the US). The success and growth of Ciro worldwide continued until 1994, when the parent company and subsidiaries went into receivership. At the end of that year, the UK operation was bought by a businessman. Today, Ciro is still well-known for their cubic zirconia jewelry set in sterling silver, costume jewelry, imitation pearls, and ear clips.

As part of my research quest, I found a 1953 catalog entitled A Book of Ciro Pearls & Jewels, Published by Ciro of Bond St., London & New York. While looking through it, I was stunned to see this Mazer double clip brooch (photo on the left), which was in the TruFaux Jewels boutique until yesterday, when I was about to publish this article. Even though this piece is sold, I decided to keep it in the story as a great example. Read on to find out more, and you’ll see a similar double clip brooch that is available for purchase.

The Mazer Bros. brooch is the second item on page 50 of the catalog (shown below) and is described as “One of the newest of the lower priced Ciro composite brooches. Divisible into twin clips, each complete in itself”. Although the separate clips are not shown in the catalog, I’ve included them in the above photo on the right. 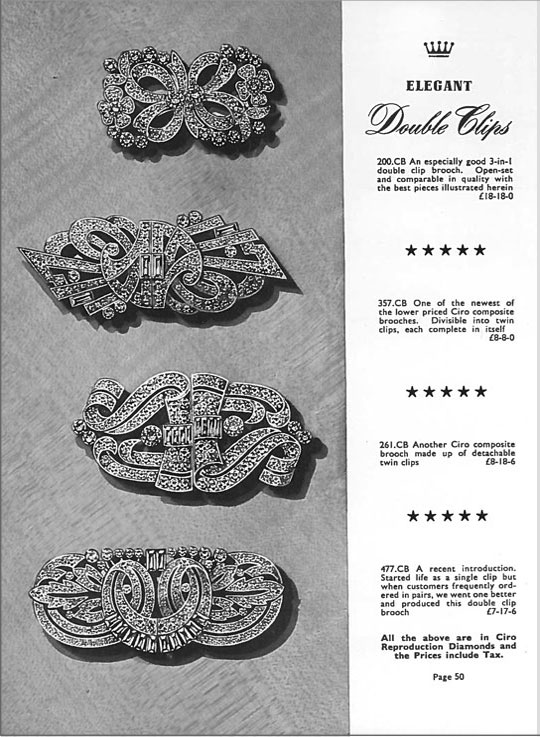 My jewelry sleuth instincts were alerted by this startling find: the TruFaux Jewels brooch is marked “Mazer” on a clip. The number stamped on the pin mechanism is for the patent issued to Marcel Boucher in 1939 (his application was dated 1935). Boucher worked for Mazer Brothers from 1930 to 1937, before opening his own firm. Mazer Brothers stopped production in 1952. This kind of evidence – the Boucher patent and information on the two companies – takes time and expertise to uncover, but I go where the facts take me. Stringing these details together led me to conclude that this jewel was likely made in the mid-1930s, while Boucher still worked for the firm.

Just like a crime detective, I have to make deductions from missing pieces of evidence. Without seeing the back of the piece shown in the Ciro catalog, I can’t be sure how it’s signed. I assume it bears Ciro’s mark and could have Mazer’s as well. Possibly Ciro bought the remaining Mazer inventory when the company closed. Boucher’s patented brooch mechanism would have been in effect at the time, expiring in 1956, so I would expect to see the patent number there as well.

The example above illustrates the complexities of accurately interpreting symbols stamped on jewelry. In contrast, the identity of the maker of the double clip brooch shown below is unmistakable. In this photo, the jewel is pinned to a hat and is available for purchase.

This piece is marked “TRIFARI” (with a crown), “CLIP-MATES” (the company’s trademark for their double clip brooches) and the patent number for the brooch mechanism. Based on these symbols and the use of rhodium-plated base metal instead of sterling silver, costume jewelry scholars Carla and Roberto Brunialti (Vol. 2, p.62) date this piece to 1938-1942.

A Buckle Bracelet with Three Names

This excerpt from a Wachenheimer Brothers’ ad in a 1926 wholesale jeweler’s catalog shows a two-row diamanté line bracelet with a buckle clasp (the last item). It would have been marked “3 20 17”, the date the patent for the construction of the links was issued. The company’s trademark in use at the time – “DIAMONBAR” – also would have been stamped on the piece.

The identical bracelet in the photo below (now sold) was part of the TruFaux Jewels collection. It bears the patent date but no maker’s mark. Based on the stampings and the type of clasp used on this particular piece, I concluded that it was sold by Otis. You can read about the research that led to this conclusion in Bracelets by Otis: A Surprising Connection, an article I co-authored with Robin Deutsch.

Although I have no photo, I can tell you that I’ve also seen a bracelet like this one in an online auction. It was marked “Birks”, a prominent Canadian jewelry retailer. I was surprised until I found a connection between Otis and that company, while researching the former (as described in my blog post Jewelry Sleuthing: A Philadelphia Story). I came across this statement made by Edward O. Otis, Jr., in his entry in Harvard Class of 1922: Twenty-fifth Anniversary Report (1947):  “I represent in the United States a substantial Canadian jewelry firm …”. Like Ciro, Birks today mostly offers jewelry inventory from outside manufacturers.

If you’re in the market for a line bracelet made by Wachenheimer Brothers, shop the Wachenheimer Brothers Jewelry collection. Shown below is a fine example from their last years of production. This jewel is stamped “WACHENHEIMER” and “STERLING”. The use of the company name instead of their “DIAMONBAR” trademark and the type of clasp dates this piece to the early 1930s.

Lessons to Be Learned

I’ve included these examples as cautionary tales that illustrate how confusing symbols stamped on vintage jewelry can be, especially when identical pieces have different marks. Retailers are not typically jewelry manufacturers. A piece that is stamped with a retailer’s name may or may not also show who made the piece. A maker’s mark, which can be letters, numbers and/or symbols instead of a word, is not the same as a retailer’s name stamped on a jewel. I see a lot of maker identification mistakes like this online from vendors who may not have the knowledge or take the time to solve these mysteries.

The Series: True vs. Fake

This article is the sixth in my blog series, whose goal is to help vintage costume jewelry buyers become more informed consumers. If you haven’t already done so, read the preceding installments: I Was Duped, How to Avoid Tarnishing a Sterling Reputation, Is It Crystal Clear?, Missing the Mark, and Mistaken Identities. And subscribe to my blog so you won’t miss the next!