The 1920s Roar Again with ‘The Great Gatsby’

The 1920s Roar Again with ‘The Great Gatsby’

With jewels by Tiffany (based on designs from the company’s archives) and evening gowns by Miuccia Prada in collaboration with Catherine Martine (long-time costume and production designer, and wife of the director), Baz Luhrmann’s The Great Gatsby promises lots of eye-candy for lovers of the Art Deco style, which was prominent in the 1920s and 1930s. Set in Long Island during the era known as the Roaring ’20s, the film’s influence on today’s fashion has been seen on the runways and red carpet since New York Fashion Week in September 2011. Instead of a contemporary reinterpretation of the Art Deco style, why not have your own piece of the Gatsby-look with costume jewelry actually created in the 1920s and 1930s? Click through to see a variety of Art Deco earrings, necklaces, bracelets and brooches here on the TruFaux Jewels website. Let’s take a look at how this style evolved.

Women’s participation in the workforce during World War I released them from the restrictive, decorative clothing of the Edwardian era.  S-shape corsets were discarded, skirts were shortened and widened, and hair and hats were worn closer to the head.  By the end of the war, designers such as Coco Chanel and Paul Poiret were creating fashions with a simpler, softer silhouette that allowed women to engage in employment, as well as educational and recreational pursuits.  War had changed the social order in general and the role of women in particular.  In 1920, American women gained the right to vote. “A Paris Spring Wardrobe by Patou: Selected and Duplicated by Bonwit Teller & Co.”

The 1920s were a decade of optimism, progress and prosperity.  The war’s end served as a catalyst for change.  Established social norms and rules were challenged, especially by young people, and a general liberalism and live-for-today attitude prevailed.

Fashion was being influenced by societal changes and by an emerging new decorative style – Art Deco – which was “a unique combination of exoticism and modernity” (Art Deco Fashion, p.6).  Art Deco epitomized the glamour of the period and pervaded every aspect of life, from architecture, the decorative arts and fashion to the fine arts, film and photography.  The style’s exotic themes, bold colors, geometric patterns and abstract designs drew from sources such as avant-garde art movements, the Ballet Russes, the arts of Africa and East Asia, archeological discoveries, and the 1920s obsession with machines, travel and speed.

In the 1920s, fashion was diverse, but the image most associated with that decade is the flapper’s dress.  It was straight, short and without a waistline.  In daywear, hips were emphasized with sashes, embroidery or hip-length jackets.  This silhouette “provided an ideal canvas for the artistic motifs of the period:  embroideries, appliqués and stylized, naturalistic or geometrically patterned prints” (Art Deco Fashion, p.18).  Evening wear reflected society’s focus on exuberance and glamour:  short and square dresses with narrow shoulder straps and side slits (to allow for dancing) were made of shiny fabrics embellished with sequins, pearls or metallic threads, and fringe that accentuated movement.  Women’s hairstyles were short or bobbed  Cloche hats, exotic turbans and bandeaus (ornamental headbands) were worn.  This ad from the April 1, 1927 issue of Vogue shows examples of day and evening wear designed by Jean Patou. 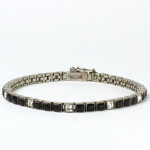 The flapper’s long, slim and tubular silhouette demanded complementary forms and types of jewelry.  Everything that glittered or dangled suited the Jazz Age.  Long, pendant earrings complemented earlobes and necks exposed by short hair.  Brooches and clips were worn on lapels, collars, belts, shoes and hats.  In the early 1930s, the double clip/brooch was invented:  a pair of clips (with a spring fastening to grip fabric) could be worn on either side of a neckline, for example, or together on a fitted frame that affixed them to a garment with a pin.  Necklaces were available in various lengths to adorn any neckline.  Bracelets and bangles were worn in numbers on bare arms.  The narrow line bracelets of the 1920s (the forerunners of today’s tennis bracelets) grew wider by mid-decade and into the 1930s.  This onyx, diamanté, and sterling line bracelet by Fishel, Nessler is describe here on the TruFaux Jewels website.

High-quality costume jewelry had gained respect by the 1920s, thanks to Gabrielle Chanel, and colorful rhinestones and pearls were particularly popular.  Colored glass stones and beads were used to imitate the gemstones fashionable in that era:  emerald, ruby, sapphire, onyx, diamond, coral, jade, lapis and rock crystal.  Faux pearls were plentiful thanks to the French, who perfected their process with the use of essence d’Orient.  White metal settings in pot metal, silver, chrome or nickel replaced the platinum of precious jewelry.  With the invention of new plastics such as Bakelite and Galalith, designers could experiment with new forms and designs and achieve a look that didn’t imitate precious jewelry.

Jewelry designers used the same motifs that characterized all Art Deco design:  geometric forms; abstract patterns derived from the architecture of ancient civilizations, animals, people and flowers; images of speed (e.g., gazelles); stylized Egyptian forms (e.g., profiles of pharaohs, scarabs, hieroglyphics, lotus flowers); fruit salads (moulded glass to imitate carved colored gemstones set in baskets by Cartier and other fine jewelers); and contrasting colors (e.g., black and white was particularly popular).  This scarab and sterling silver brooch by Walter Lampl is an example of pieces created to satisfy the public’s fascination with all things Egyptian.  You can read a description and see detailed photos of this brooch here.

Visit the TruFaux Jewels boutique to see the Art Deco collection. See my Pinterest board for many examples of Art Deco jewelry, fashion, decorative arts, and more.