As far back as I can remember, I’ve always loved black-and-white films from the 1930s-1950s. More recently, though, I’ve realized that their one drawback is that we can’t usually see the splendour of the jewelry often worn by female characters. Here’s a case in point: In the photo above from a scene in Alfred Hitchcock`s 1941 thriller Suspicion, Joan Fontaine is wearing a brooch on the shoulder of her suit jacket. A Women’s Wear Daily article that year described the piece as “a handsome jeweled clip [that] provides interest” on the side opposite the fur scarf. But we can’t make out any details. As you’ll see, this jewel is, in fact, a fabulous Verdura brooch. Read on to find out about it, its talented maker, and the movie.

Movie stars of Hollywood`s “Golden Age” often wore their own jewels on-screen. This piece was purchased by Fontaine in 1940. It illustrates the maker’s preference for pink gemstones. 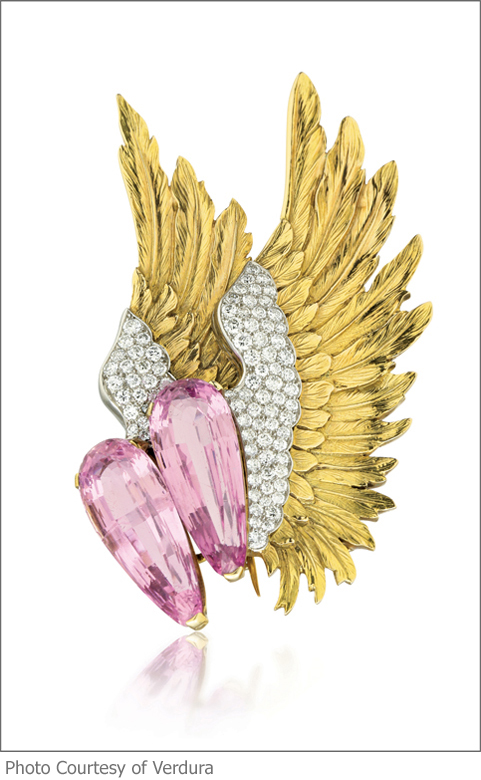 According to jewelry expert Marion Fasel, “Fulco di Verdura created the brooch when he opened his New York boutique in 1939. It’s reminiscent of jewels inspired by the Roman god Mercury he had made earlier in the decade when he worked for Coco Chanel as well as during his stint with Paul Flato. The clever silhouette of two elongated pear shape pink topazes weighing around 35.52-carats with magnificently engraved gold wings highlighted by diamonds, suggest Mercury’s winged feet.”

Fasel’s article explains Mercury’s story and how the movie’s plot may have motivated Fontaine to select this jewel to wear in this particular scene. Let me tell you about Suspicion, so you can decide if the writer’s theory is correct.

Lina McLaidlaw (Joan Fontaine), the shy, inexperienced only-daughter of wealthy parents, falls in love with and marries dashing Johnnie Aysgarth (Cary Grant), against her parents’ wishes. She doesn’t know that he is a penniless gambler and thief who plans to live off of her allowance and future inheritance.

The couple return from their lavish honeymoon to a newly-redecorated house that Johnnie paid for with borrowed money. In this scene shown below, Lina first learns that Johnnie has no money. 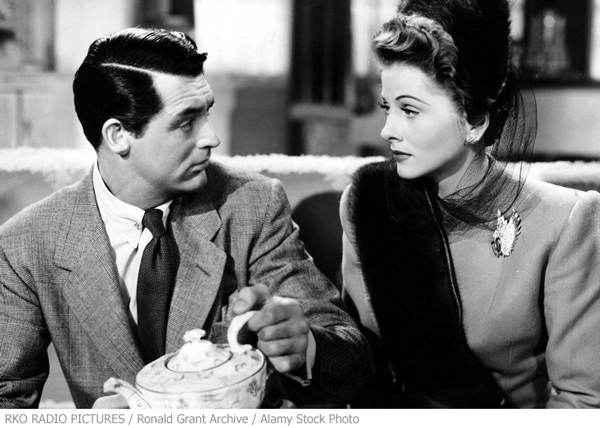 When she explains that she receives only a small allowance, he agrees to accept a job offer from his cousin Captain George Melbeck (Leo G. Carroll). A short time later, Lina finds out that Johnnie has been fired for embezzlement. She then realizes that her husband has been lying and gambling all along.

Lina thinks about leaving Johnnie but changes her mind. When her father dies, she inherits only his portrait, rather than the substantial sum Johnnie was expecting. He then enters into a real estate venture with his wealthy but naïve friend “Beaky” (Nigel Bruce). Lina suspects the plan is a guise for getting his money. Johnnie calls off the deal, and the two men leave for Paris. Beaky dies suddenly, and Johnnie lies to Lina and the police about his whereabouts at the time of the death.

When a letter arrives in response to Johnnie’s query about borrowing against Lina’s life insurance policy, it explains that the money is payable only upon her death. Lina begins to fear for her life.

And so the suspense continues to build. I won’t spoil the movie by revealing more of the plot because you can see the film very soon. According to the TCM website, Suspicion will be broadcast on Thursday, January 2, 2020, at noon (ET). Set your PVR so you won’t miss it.

Duke Fulco di Verdura (1899-1979), a Sicilian aristocrat, was well-educated, rich in social connections but penniless by the late-1920s when he started working for Coco Chanel as a textile designer. By 1930, the two were collaborating on jewelry designs. His innovative Byzantine-style gold and gemstone jewels appealed to her clients. He then re-designed some of Chanel’s own jewelry, remounting gems from gifts of ex-lovers. He created a pair of enameled cuff bracelets adorned with Maltese Crosses in a kaleidoscope of cabochon-cut gemstones. They became signature pieces for both Chanel and Verdura.

In 1934, he immigrated to the U.S. The next year, Diana Vreeland introduced Verdura to Paul Flato, who hired him as head designer. Movie stars (such as Marlene Dietrich, Greta Garbo, and Katherine Hepburn) as well as socialites embraced his style. With these connections and the financial backing of friends Cole Porter and Vincent Astor, Verdura opened his own salon at 712 Fifth Avenue in New York City in 1939. A second location in Paris opened in 1954.

Verdura retired to London in 1973 and published his memoirs in 1976. In 1983, Ward Landrigan bought the company’s archives, which included nearly 10,000 original drawings, and revived the business. The firm marked its 75th anniversary in 2014 with a three-month-long retrospective exhibition “The Power of Style”. It was featured in a CBS Sunday Morning segment, which opens with a close-up of Chanel’s famed cuffs. I had the good fortune of seeing them when I visited the salon during last month’s New York City Jewelry Week. The company’s mission is “to create bold and timeless jewelry that speaks to a new generation of jewelry lovers”. Read more of their story and see their collection.