I love mysteries almost as much as I love jewelry. In fact, I was a dedicated collector of this genre featuring female detectives before I devoted my collecting efforts solely to jewelry. So, imagine my delight when I went to see a new production of Murder on the Orient Express, based on the novel by Agatha Christie and directed by Kenneth Branagh. With an all-star cast, it delivered Art Deco splendour on the big screen. And I even recognized a 1930s Art Deco necklace. What could be better?

Set in 1934, the story begins with Hercule Poirot (Branagh) at breakfast in Jerusalem. The obsessively-meticulous, mustachioed Belgian detective is traveling to Istanbul en route to a vacation. He abandons his plans when he is summoned to London immediately to consult on a pressing case. In a café, he runs into his friend M. Bouc, director of the Orient Express, who assures him a room on the train leaving for Paris that evening.

On board, Poirot meets the other 13 travelers: an American businessman, his English butler, and American secretary; a Russian princess and her German maid; a Spanish missionary; a Hungarian count and countess; an American widow; an Austrian professor; an English physician; a Cuban-American car salesman; and an English governess.

Samuel Ratchett (Johnny Depp), the businessman, has received threatening letters. He offers Poirot a job as his bodyguard, but the detective refuses. After retiring for the night, he hears strange noises coming from Ratchett’s compartment. When Poirot opens his door to look for the source, he sees someone in a red kimono running down the hallway. During the night, an avalanche derails the train’s engine, and the passengers are stranded. The next morning, everyone learns that Ratchett was murdered. Poirot and Bouc investigate, while awaiting the arrival of railroad staff to repair the train.

What follows is the unravelling of the mystery. Not one of the travelers is who she or he claims to be. A seemingly-random assembly of passengers turns out to be anything but that. I won’t spoil the movie by revealing more of the plot, in case you don’t already know the story. What’s more important to me, anyway, is to tell you about the Art Deco jewelry, costumes, and set! 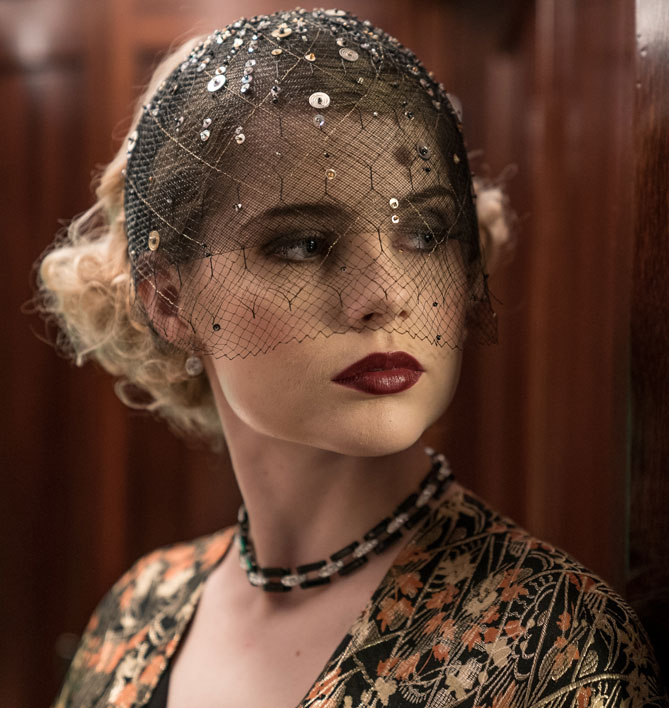 One of the 12 suspects is the Hungarian countess. Here’s what writer Valentina Valentini and costume designer Alexandra Byrne said about the character and her wardrobe in an interview for Vanity Fair: “The Countess Antrenyi, played by Lucy Boynton, is a nocturnal woman. She takes barbital to rest during the day, and spends most of her time trying to avoid life.

‘I wanted to elicit a feeling of a slightly damaged butterfly when it came to the countess,’ says Byrne. ‘She’s a dancer and very elegant; she’s wealthy, but she really doesn’t know day from night, so all her clothes get a little bit mixed up.’

“Byrne wanted to make sure that when she boarded the train in Istanbul, the Countess would look fairly put together. But once on the train, she’d be in a pajama suit with a gauze robe.”

This photo shows how beautifully “put together” the Countess looks when we first see her with her dancer husband. She is wearing a gorgeous red, black, and gold lamé coat over a black dress. According to the same interview, Byrne struck gold when she found the 1930s fabric in fabulous condition.

Although I lusted after the outfit, I immediately recognized the necklace in this scene: it’s a black Bakelite (or Galalith) and diamanté German piece, circa 1933. The black plastic rectangles are linked with closed silver-tone metal arches that each hold five rhinestones. One of the links is marked “DRGM 1138525” on the back. “DRGM” is the German patent mark (Deutsches Reichs Gebrauchsmuster), not a maker’s mark. You can see additional photos of this piece here, in the TruFaux Jewels boutique.

Production designer Jim Clay and his team created two replicas of the sleeping compartments and dining cars of the legendary and luxurious passenger train, for the 13-week production in London. Every detail – from the table linens, china, and crystal, to the light fixtures and wall treatments – was recreated in the geometric Art Deco style rather than the “more floral Art Nouveau style of the original Express,” said Clay [in an interview for Hollywood Reporter]. Branagh added: “It’s attention to detail in the golden age of travel. It’s about feeling the quality of the crisp linens and an appreciation of the finer things that represents a level of craftsmanship and history.”

More About the Costumes

Oscar-winning Alexandra Byrne spent a lot of time researching the aesthetic of the mid-1930s in preparation for the film. In addition to wanting to convey the glamour of the era, she also had to create back-stories for each of the characters. “None of the characters are depicted as the persons you first meet,” says Byrne (in the Hollywood Reporter interview). “Kenneth wanted me to collect a world history of these characters and lay clues for people to find. We needed to know how they would have decided to dress as somebody else and what resources they would have had to put that together.”

Speaking about the men’s costumes, Byrne said: “There are many differences between American, English and European tailoring in the ’30s. Trouser pleats on American trousers were set turned out, and English turned in; American suits were usually made from a lightweight cloth. Hardman’s [Willem Dafoe’s] suit is made from a coarse, heavyweight, gray wool cloth, and the style is influenced by earlier European hunting jackets.” He is dressed in the type of three-piece, belted suit an Austrian of that era would have worn.

Costumes for one of the female leads were inspired by couturiers of the period. Speaking of Princess Dragomiroff (Judi Dench), Byrne commented: “She is a wealthy Russian princess in exile who would visit the fashion houses, so I looked to Lanvin for influence.” The designer’s favorite character to dress was Caroline Hubbard (Michelle Pfeiffer), who has “a blind eye to the notion that ‘less is more.’” As a lover of costume jewelry, I’m not so sure Hubbard’s style is over-the-top. But I’m pretty sure she was wearing a Miriam Haskell brooch at the throat of her embroidered dress, in the scene when the train leaves the station. You’ll have to see the film, and decide for yourself!

I’ve revealed the name of the company that made this necklace and many more pieces like it in the 1930s and 1950s. See “Schreiber & Hiller: A Jewelry Mystery Solved” for their story. Take a look at more jewelry by this maker here.