Looking for an entertaining distraction that will take you back to a glamorous era? I have just the movie for you – The Women (MGM, 1939). This screen adaptation of Clare Boothe’s satirical play was directed by George Cukor. It features a star-studded, all-female cast headed by Norma Shearer, Joan Crawford, and Rosalind Russell (left to right in this photo). They portray Park Avenue socialites who revel in gossip about their friends’ marriages, affairs, and divorces. In addition to the witty, acerbic dialogue, viewers are entertained and delighted by costume designer Adrian and the stars’ own gorgeous jewels. Let’s start with the story, to set the framework for the rest. Then I’ll tell you what to look for when you watch the film, which will air on TCM on Tuesday, April 21st at 10:45pm (ET).

The story begins at Sydney’s Salon, where gossip flows while the wealthy clients undergo their beauty treatments. Sylvia Fowler (Rosalind Russell) delights in hearing from Olga, her manicurist, that the husband of her good friend Mary Haines (Norma Shearer) is having an affair with Crystal Allen (Joan Crawford), a perfume counter clerk. Sylvia can’t wait to share the news at a luncheon at Mary’s house that afternoon, out of her host’s earshot, of course. 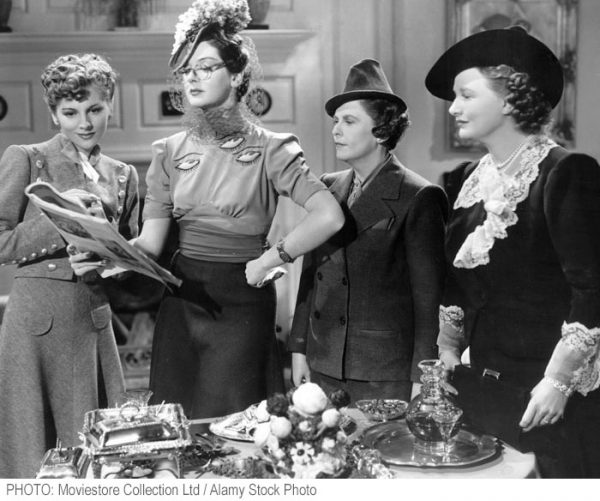 With Sylvia at Mary’s are (from left to right) Peggy Day (Joan Fontaine), Nancy Blake (Florence Nash), and Edith Potter (Phyllis Povah). While dining, Sylvia shows off her Jungle Red-polished nails and suggests that Mary ask for Olga and that color at the salon. When Mary takes Sylvia’s advice, the manicurist launches into the story of the unfaithful Stephen Haines, not knowing that his wife is sitting at her table.

For the sake of their daughter, Mary tries to ignore the news. When she and her friends attend a fashion show, she unexpectedly encounters Crystal, whom Sylvia doesn’t hesitate to identify. Mary enters Crystal’s dressing room to warn the woman to stay away from Stephen. An argument ensues, and an exaggerated version of the rivals’ battle – along with photos of the two women – is published on the front page of the next day’s scandal sheet. The embarrassing publicity forces Mary to ask for a divorce.

What follows is a trip to Reno. But that’s not the end of the story. Although I won`t disclose the rest, I will tell you that this black-and-white film includes a fashion show sequence in Technicolor. 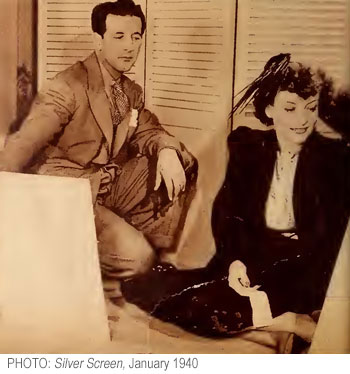 Gilbert Adrian (born Adrian Adolph Greenberg) studied fashion design in New York and Paris before his first job, designing for a Broadway musical. He had been creating costumes for MGM’s most important leading ladies since joining the studio in 1928.

Because of the story and large number of distinctive personalities, “each actress had to be dressed to type and sometimes exaggerated to make the point more forceful” (Women`s Wear Daily, September 5, 1939). As you’ll see, Adrian skillfully used costumes and accessories to contrast and emphasize the traits and behavior of each player. In this photo, he is showing some wardrobe sketches to Joan Crawford.

The stars wore precious jewelry pulled from their own collections, selecting pieces each woman felt was in keeping with her character. Norma Shearer and Joan Crawford were known jewelry collectors. 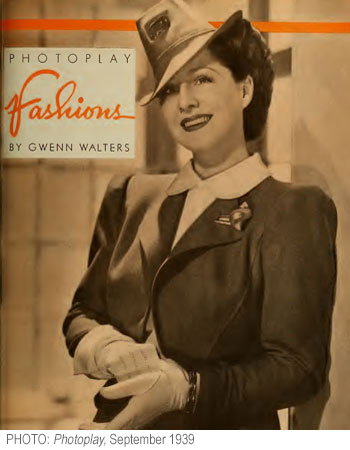 In her insightful analysis of the film’s costumes, fashion historian Raissa Bretaña describes the costumes for Norma Shearer’s naïve character: “As a devoted wife and mother, her style is considerably less ostentatious in comparison to her catty counterparts. While the other Park Avenue matrons swathe themselves in flamboyant fashions that seem to evince their dubious morality, the wholesome Mary Haines is mostly outfitted in sensible suits”.

Though understated, they are stylish and elegantly-tailored. This example is described in Photoplay as bright-blue wool with a short, cutaway jacket, white blouse with collar, and flared skirt. The felt hat with a jewel inset is typical of the eye-catching, chic hats she wears in the film.

A snail lapel clip is added as “an amusing accessory note”, but other lapels are typically adorned with a sparkling, glamorous brooch. The bracelet here, with links in the tank-track pattern so popular at that time, appears in many scenes. Elsewhere, Shearer wears a combination of diamond and gemstone wide and line bracelets (as shown in the first photo above). 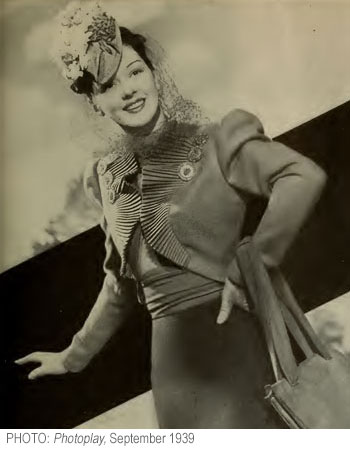 According to Bretaña, Adrian’s “playful interpretation of fashionable dress provided a comical coating to Sylvia’s viciousness. Subtle exaggerations of silhouette combined with whimsical accessories lent a delightfully cockeyed touch to the character … Adrian’s playful approach to designing for Sylvia Fowler is evident in her first costume”, seen here.

The Photoplay article describes the suit: “The jacket, with pleated front edging and silver filigree button trim, is of lavender woolen; the skirt of the frock beneath is of purple woolen, the girdle of lavender crepe, and the blouse of fuchsia crepe. Gay winter flowers top the fuchsia fabric braid hat”.

When Sylvia takes off her jacket, she reveals this unexpected blouse embellished with three appliqued violet eyes. Ever since my first viewing of The Women, I was puzzled by those eyes – they always looked so strange to me.

Then when I was researching my previous blog post – “The Jewels of Maison Schiaparelli: Yesterday & Today” – I had a eureka moment: the Jean Cocteau eye brooch in my article! It influenced the Maison’s current artistic director’s spring 2020 haute couture collection, but it also influenced Adrian decades earlier. And how fitting to use this motif on an outfit worn by the malicious snooper Sylvia. When she removes her jacket, Nancy asks, “Great guns! What are you made up for – the Seeing Eye?”. (Here the Seeing Eye refers to a guide dog for the blind.)

Although fascinated with Surrealism, Adrian wasn’t able to incorporate its motifs in his designs. But this film gave him the opportunity to use “Surrealist elements in both Sylvia’s costumes and in several gowns designed for the Technicolor fashion show” (Bretaña). As the story progresses, Sylvia’s costumes become more eccentric and, in some cases, just silly. The navy-blue-and-white-striped taffeta dress she wears to the fashion show has a “ a voluminous bustle that bounces amusingly as she scampers about the salon stirring up drama”. Schiaparelli’s collections often featured the bustle form.

Aside from her large, emerald-cut diamond engagement ring, the only jewelry I could see on Sylvia is a bracelet or watch worn with the colorful suit.

Adrian had been designing for Joan Crawford films since 1928. Although he is credited with creating the padded-shoulder-silhouette for her, he was really influenced by Elsa Schiaparelli. She had designed shoulder-padded garments for Crawford’s personal wardrobe before he adapted them to her on-screen outfits.

Other than in her simple black dress – her store uniform – Crawford is attired in a style suitable for the vamp she plays. In the dressing room scene where she and Mary have their confrontation, Crystal is clad in a gaudy, ostentatious gold-lamé négligée with matching turban. Mary enters from her fitting room wearing an elegant black dinner dress. 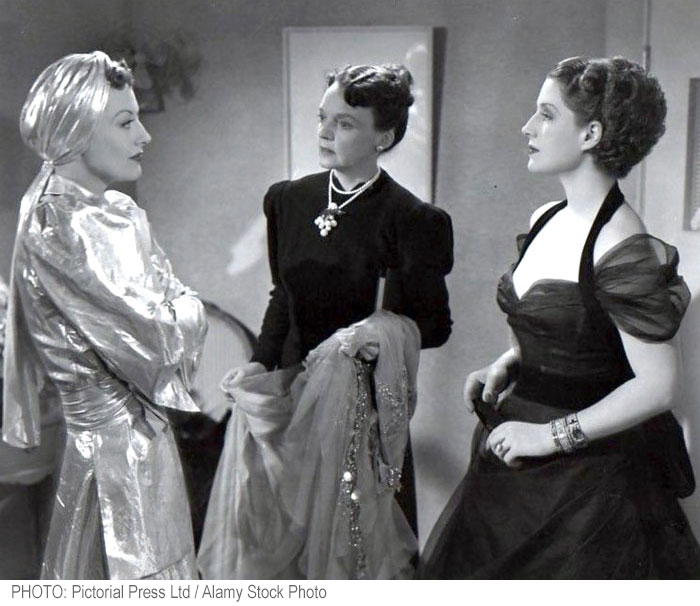 I’ve included this photo for two reasons. The first is that the “two women are perfect foils in clothing and character, dramatically juxtaposed within a single frame” (Bretaña). The second reason is to alert you to the jewelry worn in this scene. On Mary’s arm, you can see a stack of gemstone-encrusted bracelets. Although you can’t see Crystal’s jewel in this movie still, if you watch the film carefully, you will see the amazing gold “hinged bracelet set with two large half-moon shaped citrines”, which was part of a suite designed by Raymond C. Yard and sold at Sotheby’s in 2012.

By the 1920s, movies had become the most popular leisure activity. Hollywood had developed into a major influence on North American fashion and the portrayal of high society life. Magazines publicized fashion trends and the glamorous wardrobes of movie stars.

Knock-offs of on-screen clothes were promoted by the retail industry to coincide with the openings of major movies. The night of the premiere of The Women at Grauman’s Chinese Theatre in Los Angeles, models wearing dresses designed by Adrian were on display in the forecourt. Retailers took advantage of the film’s publicity by using the film title and movie stills in their advertising. When the film opened in major cities, stores “featured dresses and toiletries suggested by the picture” (Women’s Wear Daily, October 26, 1939).

Many costume jewelry makers created imitations of fine jewels worn in films, to enable consumers to buy what their favorite movie idols wore on-screen. The larger companies often used film stars in their advertisements in aspirational magazines such as Vogue.

Norma Shearer’s character wears two styles of bracelets throughout the film. One is a tank-track pattern, new to the decade, that is metal (probably gold) without embellishments. The other is gemstone-encrusted line bracelets of different widths, worn in multiples. The latter can be seen with both day and evening wear. Although she wore fine jewelry, the TruFaux Jewels boutique has costume pieces in similar designs, that are more affordable. All of these pieces are in excellent condition because they were made by the best.

This design is formed by flexible, geometric links alternately positioned. The name is derived from the image of machine movement or, following World War II, the tracks seen on military tanks. These examples illustrate variations on the theme. Click on each photo for a detailed description. 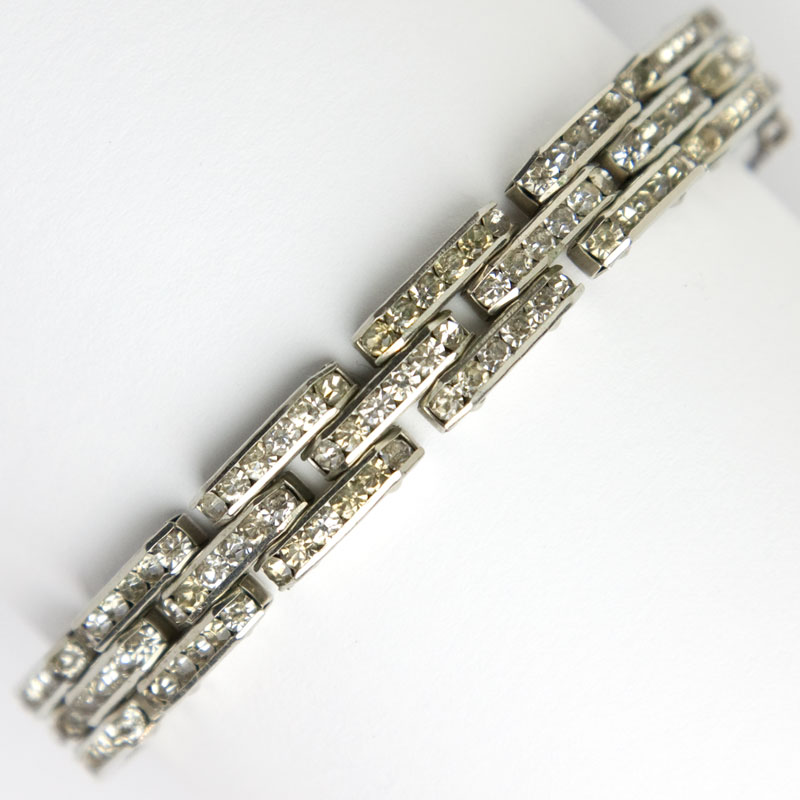 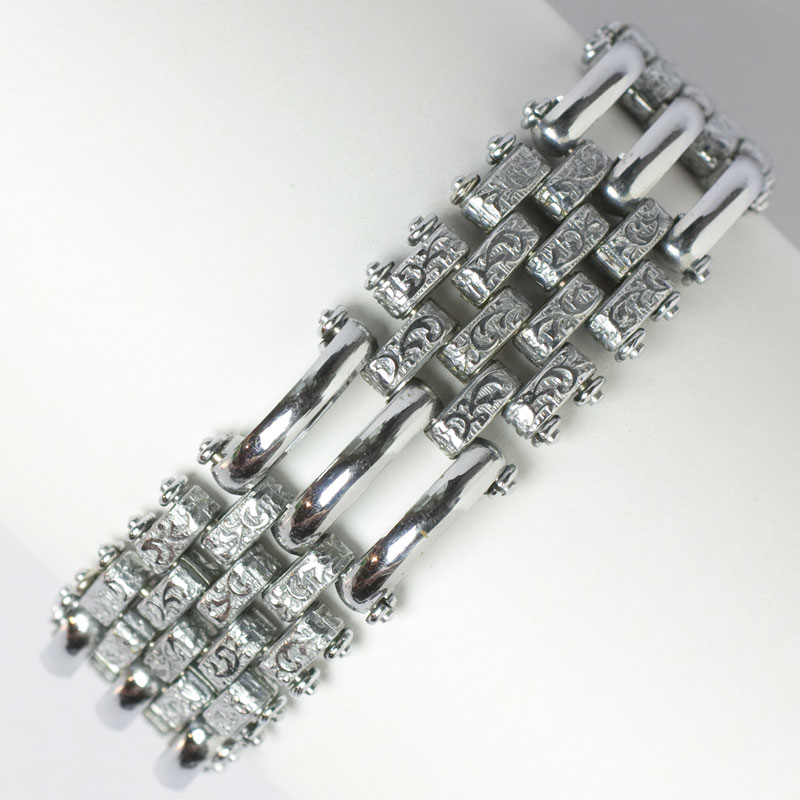 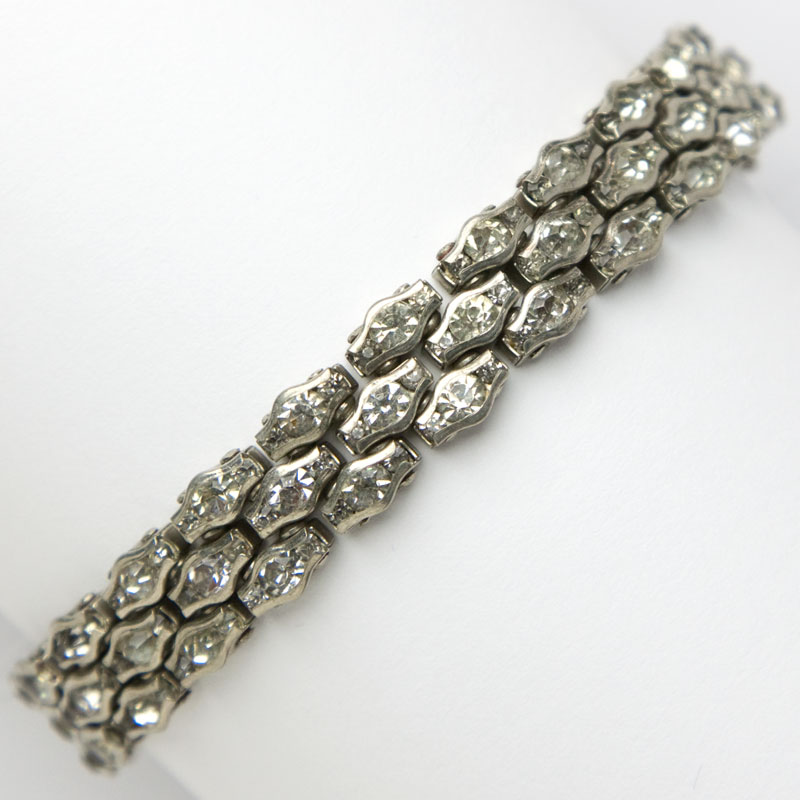 Born in the 1920s, line bracelets continued to be popular adornments well into the next decade. In both fine and costume jewelry, they typically were single rows of real or faux diamonds alone or alternating with colored stones. Known as flexible bracelets in their day, they were also made in double and triple rows. This wider format was in keeping with the 1930s style of broader, heavier pieces with more complex designs. Here are three examples. Click on an image to see a detailed description.

Visit the boutique to see the 1930s collection, for more bracelets as well as necklaces, earrings and brooches from that decade.