If you love mysteries as much as I do, you probably know the plot of Agatha Christie’s Death on the Nile:  Linnet Ridgeway, a beautiful heiress, marries Simon Doyle, a handsome rogue who was engaged to Jacqueline de Bellefort, one of Linnet’s closest friends. For their honeymoon, the couple travel to Egypt and embark the luxurious steamship Karma for a river cruise along the Nile. The well-to-do passengers include Hercule Poirot, whom the bride has invited because she fears for her safety. As she says: “When you have money, no one is ever really your friend”. The glamorous Art Deco-styled ship and majestic vistas are pierced by a sinister undertone of secrets, jealousy and unbridled passion. Murders are committed, and Poirot realizes that every passenger has a motive and that everyone is a potential suspect. Of course, he solves the case.

The latest film version of this 1937 novel, directed by Kenneth Branagh, opened in cinemas in time for Valentine’s Day weekend, after a delay of more than two years because of the pandemic. The movie features a well-known international cast, including Gal Gadot (Linnet), Armie Hammer (Simon), Emma Mackey (Jacqueline), Jennifer Saunders (Marie Van Schuyler, Linnet’s godmother), Dawn French (Mrs. Bowers, her companion) and Branagh himself as Poirot. Michael Green’s screenplay has created characters not part of the Christie novel – Bouc (Poirot’s friend, played by Tom Batemen) and Bouc’s mother, Euphemia (Annette Bening). While critics have hailed this all-star ensemble, from my perspective, the real stars of the production are those who have no lines – the jewelry.

Some critics have said that the famed Tiffany Diamond necklace, given to Linnet by Simon as a wedding gift, is the star of the film. This jewel features a 128.54 carat, cushion-shaped brilliant yellow diamond suspended from 100 carats of white diamonds set in a geometric pattern. (While Lady Gaga got to wear the actual necklace to the 2019 Oscars, security requirements necessitated the use of a Tiffany-created copy in the film.) Costume designer Paco Delgado worked with the jewelry house to choose additional vintage and contemporary pieces for the other cast members.

Although I like some of the Tiffany jewels, particularly those designed by Jean Schlumberger, they’re not my style. Costume jewelry from the 1920s-1930s is more my speed. And because I sold six Jakob Bengel pieces to the production’s costume buyer, I watched the film intently to see if any made the final cut. They didn’t. But I did spot a pair of earrings by the same important German maker, worn by Annette Bening’s character, Euphemia. 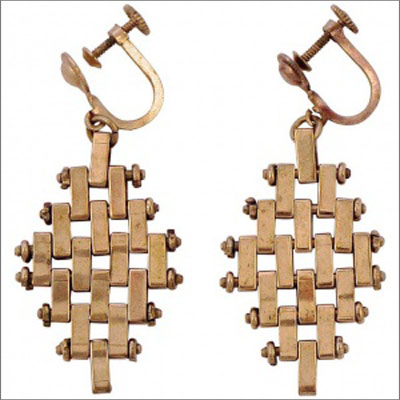 Early in the film, before the cruise begins, Poirot unexpectedly meets his friend Bouc. He takes the detective to see his aristocratic mother, Euphemia. She is a renowned painter and resident of Mayfair, a posh area in London. She is also very obsessed with her son.

In this scene she is wearing earrings like the pair shown here. (Hers have a chromium-plated finish over the brass.)

The earrings are designed in Bengel’s well-known brickwork (or Mauerwerk) pattern. It is fashioned from flat metal links held together with invisible rods that make the rigid-looking piece extremely flexible. The design mirrors the brickwork/diamond structure of the pyramids Euphemia is painting.

Below is a collar in this motif that’s available in the boutique. The photo on the right shows a close-up of its construction, which makes this necklace feel very slinky when worn.

Bengel produced many necklaces and bracelets in variations on this pattern. One of the necklaces I sold to Fox UK Productions is a simpler, lighter version with black and green enamel accents. It is shown below.

Greatly influenced by the Bauhaus metal shop and French avant-garde jewelry designers, Bengel was among many who created jewelry in the 1930s in what is known as the Machine Age style.

Delgado’s choice of Bengel jewelry for this character in particular doesn’t surprise me, given his approach to costume design. In an interview for the Motion Picture Association, he “reveals himself to be something of a Method designer: great-looking clothes mean nothing unless they reflect the character’s motivation”. He chooses fabrics, colors and styles that reflect each character’s personality. As a whole, the cast are dressed in the modern style of the decade.

Although I saw Euphemia wearing a Schlumberger-designed Tiffany bracelet in another scene, I think the Bengel earrings suit both her informal attire and her motivation – control over her son’s life. These earrings are a study of precision and control. And a wealthy, artistic woman like her probably shops in Paris, where Bengel jewelry was sold from at least 1928-1935. Elegant department stores such as Printemps and Galeries Lafayette as well as boutiques did business with the firm (Weber-Stöber, 279, 281).

While Linnet and Jacqueline stick to diamonds, the attire of some of the other aristocrats is more restrained. Marie Van Schuyler, Linnet’s godmother (Jennifer Saunders), has given the bulk of her fortune to the Communist Party. Mrs. Bowers, her companion (Dawn French), comes from a family who lost their fortune in the 1929 stock market crash. Her high-quality clothes are nearly 10-years-old in style. Both women wear long beaded necklaces and dangling beaded earrings.

Here are two examples from the 1920s-1930s that are like those worn by these characters. Both pairs are available in the boutique.

I’m delighted with how the costumes and jewelry play important, if unspoken, roles in this production of Death on the Nile. I’m also proud that Jakob Bengel necklaces, earrings, and a bracelet from the TruFaux Jewels boutique got to audition for starring roles. At the same time, I have to admit that I feel like an actor whose best scene ends up on the cutting room floor.

Visit the boutique’s 1930s Jewelry collection. If you like the modernism of the Bengel pieces, shop the Machine Age collection and read about the origin of this style in my post 1930s Bauhaus Inspired Jewelry: A Celebration.

Jewelry in the Movies: Cartier Bracelets