“No one wants to be fooled” is the opening line of a documentary film about a series of fake paintings sold by a New York gallery for $80M (Avrich, 2020). I think the same sentiment applies to anyone who is duped into buying something that isn’t what it purports to be, whatever the price. Yes, it even happened to me – I know how it feels to unwittingly buy costume jewelry fakes. Here’s one story.

A number of years ago before I founded TruFaux Jewels, I was exploring costume jewelry made after the Art Deco era. I knew I would have to expand my knowledge base and collection if I wanted to establish a vintage costume jewelry business. So I started looking at eBay every morning.

One day I came across the listing of an “Early Miriam Haskell Baroque Pearl Necklace & Earrings: Impossible to find another similar with those unique pearls”. The description went on to rave about their rarity and the fact that they were used “only in early creations of top designers”.

The listing stated that the 48-inch long necklace was unmarked, but the earrings were signed “Miriam Haskell”. (I knew that makers in the first half of the 20th century often marked only part of a set, so that fact didn’t send up a red flag.) After 421 bids, I won the jewels for US$460. I was thrilled.

What’s Wrong With This Picture?

When the package arrived and I looked closely at the pieces, I saw many Haskell-like features. Colored-glass beads were interspersed among the faux pearls. Decorative accents in gold-tone, which the company called “Russian gold”, were used. The top pearl in each earring was encircled by a ring of tiny pearls.

At the same time, I was struck by an anomaly. The spring-ring clasp on the necklace was an older style – that is, it had no nib to grasp with the thumb to facilitate opening (like the patent drawing on the left, which dates to 1920). Instead, the clasp was an earlier style, originating in the Victorian era, although it was used by many makers well into the 20th century. But Haskell’s use of this particular earring clasp – a combination ear clip with a screw, patented by Markus Jellinek in 1946 and seen on the right – did not begin until 1960. I realized that necklace clasps often require replacement over time, but no one would swap an older-style for a new one. The findings – a term for clasps, fasteners, connectors, etc. – weren’t from the same era.

Consultation With a Jewelry Expert

Fortunately, I have a friend, an expert on Miriam Haskell jewelry, who could verify the authenticity of my purchase. I sent her photos and pointed out the discrepancy in the findings. When I read her reply, I was stunned. She agreed with the issues I had raised and pointed out the bigger problem: by the time the company was using the Jellinek ear clip, they had been buying all of their pearls from a particular Japanese maker. Even before then, the imitation pearls used in Haskell jewelry were of the highest quality. And the ones in this set fell short of their standard, as you can see in these photos. What a difference! 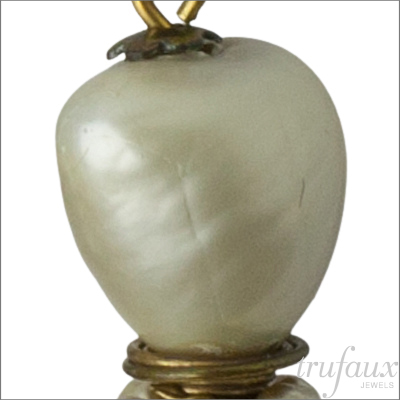 As soon as I confirmed that I had been duped, I contacted the seller to ask for a refund. She refused. Unfortunately for me, the time required to validate the seller’s claims exceeded the dispute resolution limit eBay had in place then. All I could do was to post negative feedback on the seller. She had the nerve to offer to return half of my money if I withdrew the feedback. I demanded a full refund and received no response.

Had I been more experienced with Haskell jewelry, I would have noticed the pearls right away. And I would have seen the lack of consistency in the design of the red beads – not all are paired with Russian gold embellishments.

In the years since this incident, I have looked at thousands of pieces of jewelry online or in-person. Because I’ve limited my collecting to certain makers and dates of manufacture, I’ve been able to develop an eye for determining if a seller’s claims are valid. That skill along with tons of research in my area of specialty have enabled me to publish articles and speak at conferences.

Someone went to a great deal of trouble to fool potential buyers of these costume jewelry fakes and succeeded. While I can’t tell you how often this deliberate type of fraudulent activity occurs on the internet, I can tell you that much of the costume jewelry I look at online is misrepresented. As a result, countless buyers are purchasing vintage costume jewelry that is not what the seller claims it is.

A New Series: True vs. Fake

This article is the first in a new series I’m launching to help you become a more informed consumer. Yes, you should buy what you like. But I want to point out some of the pitfalls you may encounter online, so you’ll know what questions to ask before making purchasing decisions. Stay tuned!

True vs. Fake: How to Avoid Tarnishing a Sterling Reputation