I have to admit that I’m a stickler for accuracy. The quest for information satisfies my love of research and learning. Over the years, I’ve studied costume jewelry history largely on my own and have discovered which sources are reliable and which are not. All too often I see misinformation repeated across many internet sites. One of my pet peeves is how often costume jewelry marks are misinterpreted. Because the markings on a vintage costume jewel tell so much about the piece, I would like to help you understand their message.

What Are Costume Jewelry Marks?

Marks on jewelry can tell you who made the piece (called the “maker’s mark”), when and where it was made, what metal was used, and more. However, to ascertain these details, you have to understand what you’re seeing. Some marks are words, letters, numbers, and/or symbols. Let’s look at some examples.

Some makes’ marks are straight forward. The bracelet on the left is stamped “Wachenheimer” — for Wachenheimer Bros. in Providence, Rhode Island. The jewel is also marked “Sterling”. So the stampings tell us everything except when the piece was made. The clue for dating this bracelet is in the maker’s mark. During its years of operation, this company used three different trademarks. This one, their company name, was stamped on pieces made from around 1929 until 1934, when it ceased operations.

On the right is a line bracelet by this manufacturer but with its earlier trademark – “Diamonbar”. This mark was used from around 1916 until “Wachenheimer” replaced it. This example shows that the maker’s mark isn’t always the company’s name (contrary to what you might see on the internet). And in this case, because different marks were used during particular years of production, what’s stamped on the piece can help date it. 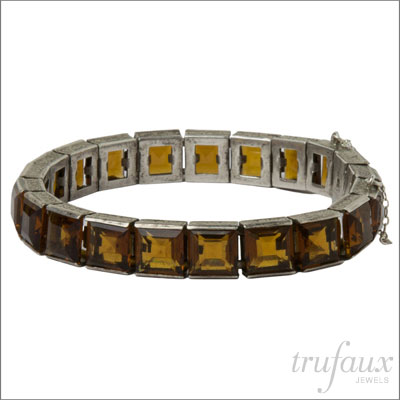 Other manufacturers marked their jewelry with symbols or abbreviations of their company names. Here is a 1940s necklace by Walter Lampl. It bears this mark, the initials of the company name printed in script within a shield, which was used by the mid-1940s and after.

Patent Marks in the U.S.

Patent numbers stamped on jewelry can tell a lot about a piece, but they can also lead to incorrect information when not interpreted accurately. Let me give you a brief overview of the terminology.

Design patents remain in effect for no more than seven years and usually for half that time. Even so, a design patent can help you date a particular piece. However, the number (which is preceded by the letter “D”) wasn’t always stamped on the items. Many manufacturers marked their pieces with their maker’s mark and “Pat. Pend.”, for patent pending. Because the application process could take many months, production of a design often commenced before the patent was issued.

Here’s an example that challenged my jewelry sleuthing skills. The bracelet on the left bears only the design patent number – D121372 – but no maker’s mark. When I found the patent, shown on the right, I learned that it was granted in 1940 to Victor Primavera of Providence, Rhode Island. Further research indicated that at that time, he was with Felch & Co., a jewelry manufacturer in the same city. Primavera was an officer of the company when it incorporated in 1946 and changed its name to Danecraft, Inc. in 1953.

Because utility patents remain in effect for 17 years, they are not useful for precisely dating jewelry. And because those that pertain to findings (e.g., fasteners) were usually made by a different company, these patents are not always useful for identifying who created a jewel.

Here’s an exception. This double clip brooch has no maker’s mark, but it does show two utility patent numbers: “PAT 1852188” on the dress clips and “BRITISH PAT. 410696” on the brooch frame. It is also stamped “Made in Canada”. I was already familiar with the first patent, so I had to research the second. The results were surprising. On the right is one of the technical drawings in the patent issued to Oscar Placco and assigned to Cohn & Rosenberger (aka Coro) in 1934. I knew Coro opened a manufacturing facility in Canada in the 1930s, but I wouldn’t have been able to connect the company to this piece without the patent information.

The word “Déposé” (registered in French) is the patent mark for jewelry made in France. It was also used by Germany and Austria until after World War I.

“DRGM” (Deutsches Reichs Gebrauchsmuster) is the German mark for a registered design that was used until the Third Reich fell in 1945. These letters are not a maker’s mark. But if a piece is marked “DRGM” followed by a patent number, you may be able to find out the manufacturer’s name. I can tell you from experience that this process isn’t easy.

Years ago when shopping online, my eye was drawn to many jewelry items bearing the mark “DRGM 1138525”. At the end of my extensive sleuthing, I determined that the holder of that patent was Schreiber & Hiller of Pforzheim, Germany. You can read about this company and the quest I shared with my friend and colleague Robin Deutsch in this article.

This patent was for an oblong metal link that was designed to form a channel setting for round stones. The surface of the link was made in different shapes – curved, flat, and pointed. Another arrangement featured trios of stones in a honeycomb pattern. The company often combined diamantés with colored stones. Some designs added Bakelite or Galalith to the channel-set diamantés. Jewelry with this mark was made before the start of World War II in 1939.

Here is one of the necklaces marked with this patent number. On the right is a close-up of the centerpiece, which features links of curved diamantés alternating with links of black Bakelite (or Galalith) with pointed tops. The pins connecting the links indicate how well-articulated this piece is.

Because I’ve done extensive research on this company and because I admire its creations so much, I cringe every time I see jewelry marked “DRGM” without the patent number 1138525 attributed to Schreiber & Hiller. I cannot emphasize enough the meaning of “DRGM” – it’s a German term that indicates the issue of a design or utility patent. The letters do not belong to a particular company. And the letters are not a company name – no one should ever describe a piece of jewelry as “by DRGM”!

The community of vintage costume jewelry collectors has been documenting makers’ marks for many years. See Researching Costume Jewelry, which is now hosted by Costume Jewelry Collectors International.

You can read more about design patents and utility patents on the TruFaux Jewels website.

The Series: True vs. Fake

This article is the fourth in this series, whose goal is to help vintage costume jewelry buyers become more informed consumers. If you haven’t already done so, read the first three installments: I Was Duped, How to Avoid Tarnishing a Sterling Reputation, and Is It Crystal Clear?. And subscribe to my blog so you won’t miss the next!

True vs. Fake: How to Avoid Tarnishing a Sterling Reputation