I knew the answer wasn’t 1943. When dating jewelry for my website, as a first step I look for a maker’s mark. The line bracelets I was examining bore the Otis trademark, but that was the challenge. Every readily-available source I checked stated that this Providence, Rhode Island, firm commenced operations that year. But my eyes told me that the jewelry in my hands had to have been made at least a decade earlier. So my search was on – when was that company actually in operation?

Since founding TruFaux Jewels in 2010 and researching each piece I’ve added to the boutique, I’ve realized that much of the information on the Internet regarding costume jewelry history is incorrect. So-called facts are often repeated word-for-word on multiple websites without attribution. My background as a librarian demands that I verify everything I post. Usually this research is extremely time-consuming and tedious. Information on many of these companies, long out of business, is very elusive. The best source is often jewelry trade publications. For U.S. companies, I reference The Jewelers’ Circular (which became The Jewelers’ Circular – Keystone and is now JCK).

A Trip to Philadelphia

Because this magazine is not available in my city, I need to travel to find a complete archive of the publication. The closest research libraries are in Philadelphia and New York. On this quest, I chose the former.

This photograph shows the Parkway Central Library (considered the research library in the city). This beautiful Beaux-Arts building opened in 1927, after 10 years of construction. It was designed by Julian Abele, the head designer at the architectural firm Horace Trumbauer Company. He was also the first black student to graduate from the University of Pennsylvania Graduate School of Fine Arts in 1902.

A much-needed major renovation was completed early last year. Unfortunately, my visit about five years ago took me to a tired and dreary microfilm department.

A Source for Dating Jewelry 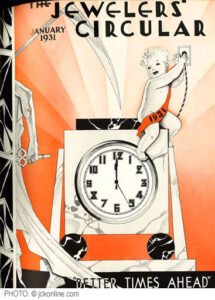 The Jewelers’ Circular published articles designed to assist those in the jewelry trade. Each issue also included ads and news submitted by subscribers. The latter was the trade’s social media of the day. Announcements of incorporations, ownership changes, showroom openings, traveling salespersons’ itineraries, and personnel changes were included. Personal items such as weddings and vacation plans were also published.

Each city considered a major jewelry center had its own page(s). Understanding the organization of the magazine was critical, because finding what I was looking for (an announcement about Otis, Inc.’s opening) required searching microfilm page by page – not a fun task.

I sat there for hours, slowly turning the wheel on the microfilm reader to advance through each issue. I was looking for the name of the company or its founder – Edward O. Otis, Jr. When I work like that I’m always concerned that I’ll miss something because I feel as though I’m in a stupor.

On this day, I got lucky. In the December 1934 issue, the name “Edward O. Otis” jumped out at me. I had found his press release that announced his purchase of the assets of Wachenheimer Brothers. This well-known and well-respected maker in Providence had ceased operations earlier that year.

I distinctly remember saying out loud, in a soft voice, of course, something like “Oh, my!”. While at the same time, in my mind’s eye I saw myself standing on one of the large tables in the reading room and shouting about my discovery.

More to the Story

In addition to solving my first dilemma – the correct dating of the Otis bracelets – this revelation led to further research. I then collaborated with my friend Robin Deutsch, and we published our feature article: “Bracelets by Otis: A Surprising Connection”. 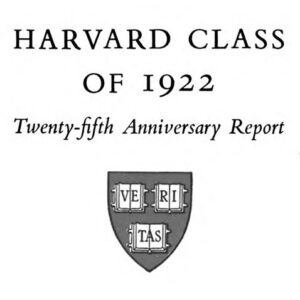 In preparation for this post, I decided to take another look at digital resources to see if I missed anything the last time around. I found this book, which was published in 1947 for the members of Otis’ class. The entries read like the answers to a questionnaire. What a thrill to see what he wrote about his life since his graduation! Don’t forget – real people were behind these companies and the jewelry we love.

In addition to data such as home and office addresses, occupation, spouse’s and children’s names/birth dates, the entry has a page-long essay about Otis’ life in the 25 years since university. Regarding his entry into jewelry manufacturing, he wrote:

I bought a small bankrupt costume jewelry plant and started to work out some ideas which some might have thought ‘theoretical’ only. Starting on a ‘shoestring’ and a bank which lent very modest amounts, purely, as they stressed, on personal character, we gradually prospered and have employed up to one hundred hands. My wife has worked with me and still is my partner.

The piece ends with these words: “I’m generally having lots of fun because I really like what I’m doing”. I feel the same way!

Who Made Those Art Deco Bracelets?