While North American fans eagerly await tonight’s premiere of Season 5 of Downton Abbey, those who haven’t found out the forthcoming plot lines from their UK friends are wondering about the answers to last season’s cliff-hangers. For example, which suitor, if any, will Lady Mary choose to marry? What happened to Lady Edith’s beau, editor Michael Gregson? Did Mr. Bates kill Green, Lord Gillingham’s valet? Will a romance blossom between Tom Branson and Sarah Bunting, the village school teacher? Other viewers, like me, are asking:  What will the female characters be wearing? While I can’t answer that question definitively, I can tell you about women’s fashion and jewelry in 1924, the year in which Season 5 episodes take place.

Caroline McCall, who led the costume design team in Series 3 and 4, won a BAFTA award for her work last season. In an interview with Red Carpet News TV (accessed on www.enstarz.com), she said: “I’ll be watching another costume designer [Anna Mary Scott Robbins] do the next series because I’ve moved on to other things. But I’ll be very excited to see what they’ve done with it and as it moves forward into the 20’s and more into what people think of the 20’s in the flapper era …”. 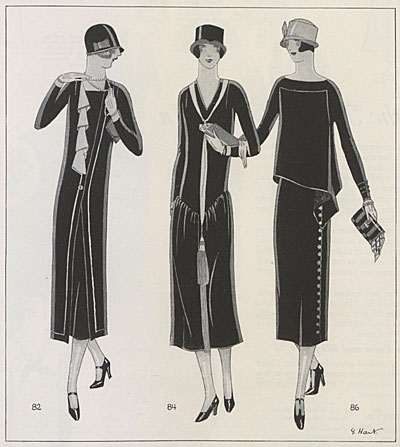 McCall is alluding to the straightened and flattened silhouette known as the garçonne look, which  had taken hold of women’s fashion by the mid-1920s. (That name is based on the 1922 French novel La Garçonne, or The Tomboy, by Victor Margueritte.) This tubular, androgynous look featured dresses in bright colors and bold patterns, dropped or invisible waistlines, and hemlines that rose from ankle-length in 1924 to knee-length by the following year. This style became synonymous with the flapper, who embodied the free spirit of the 1920s. Because she wore her hair short, a new style of hat – the French cloche – came into fashion. Its mushroom shape fit tightly to the head and flared around the face. The brim was either turned up or angled down toward the face.

The Bonwit Teller ad shown above on the left is from the August 15, 1924 issue of Vogue. With the caption “Misses’ Advance Fall Silk Frocks” are three daytime dresses of that mode. The “coat-frock” on the left is made of “ottoman silk faille in black, navy blue or tile red, with contrasting jabot and pipings”; the middle, a “replica of a Patou frock … in black crepe-back satin, with ribbon tie and tassel in contrasting colors”; and the one on the right, “in Mongole crepe silk trimmed with ciré braid [in] black, brown or navy blue”.

During this era, many French designers (such as the fashion houses of Jean Patou and Callot Soeurs) sold their designs to select American retailers for reproduction. This Bonwit Teller ad from the November 1, 1924 issue of Vogue has the caption “Callot Gowns in Replica”. The evening gown on the left is “in silk velvet with net top and exquisite embroidery in Callot colorings, fuchsia, coral pink or black”; the gown on the right is “in mirror satin with inserts of net; girdle of moire ribbon; corsage of French flowers [in] flesh, white, black. The types of fabrics used were chosen for their ability to fly away from the body. In this ad, the illustrations themselves suggest the flowing motion of evening gowns in this era – they were designed for dancing.

Jeanenne Bell, in Answers to Questions About Old Jewelry, describes the 1920s style as follows:  “Dangling earrings, long ropes of beads and a multitude of bracelets all added to the razzle-dazzle of the outfit. Everything that glittered or dangled captured the imagination. Crystal and rhinestones became fashionable.” By the mid-1920s, costume jewelry had gained respect, thanks in large part to Coco Chanel. When she introduced the use of imitation stones and plastic in her jewelry, costume pieces became not only acceptable but desirable.

An article entitled “Sketches and Notes from Deauville” in the October 1, 1924 issue of Vogue describes several pieces of Chanel jewelry as well as accessories by other high-end designers (who had boutiques in Deauville, the popular and wealthy resort town near Paris). Among the illustrations is “A chic necklace [which] has beads of white crystal between balls of imitation hematite” (shown here). It looks a lot like the Amethyst & Crystal Bead Long Art Deco Necklace shown here in the TruFaux Jewels boutique. For more jewelry from this era, click through to see the Art Deco Jewelry collection.

For More Information on 1920s Style

For more information about fashion in this era, read my earlier post on season 4, ‘Downton Abbey’ Style and ‘Downton Abbey’ Style Finale (my post on season 6). Additional sources are Fashion in the Time of ‘The Great Gatsby’ by LaLonnie Lehman, and Emily Spivack’s informative and entertaining 5-part series “The History of the Flapper”, on Smithsonian.com. This series includes a number of fun photographs from the period.