As North Americans eagerly await tonight’s broadcast of the first episode of Season 6 of Downton Abbey, many do so with some regret – this season will be the last. Viewers are anticipating the answers to last season’s cliff-hangers. For example, will Lady Mary marry again? Will Anna and Bates have a baby? What is in store for Lady Edith? Will Tom Branson find happiness in America? Some viewers, like me, are wondering: What will the female characters be wearing?

This season is costume designer Anna Mary Scott Robins’ second as head of the incredible team that dress our beloved characters. She has tweeted costume drawings and images of lace and beaded and embroidered fabrics and trimmings of the 1920s along with hints at accessories we’ll see. If they aren’t enough to whet your appetite, let me show you some examples of fashion in 1925, the year in which Season 6 episodes take place. 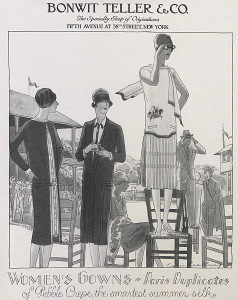 By this time, the free-spirited flapper was established as the modern young woman, the Jazz Age was in full swing, and youth and their live for today ethos were the focus of popular culture. Women drank liquor, smoked, and wore makeup in public. The fashionable silhouette emphasized the slim, youthful body, with dropped-waist, knee-length dresses. Women whose figures didn’t conform to the look relied on corsets to achieve the desired effect. As a 1923 ad in Vogue stated: “‘Being slim may be a matter of pounds, but looking slim is a matter of where those pounds are placed.’ Gossard Corsets and Brassieres offer an easy way to keep the figure youthful”.

The three day dresses in this ad from the May 15, 1925 issue of Vogue illustrate the popular silhouette. They are made from pebble crepe (a textured weave of silk) and are replicas of French designers. All of the women are wearing tight-fitting cloche hats over their bobbed hair. Notice the racetrack setting for the ad, which suggests leisure and speed, which were both highly-prized in the Roaring Twenties. 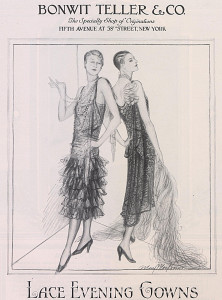 At this time, many French fashion houses sold their designs to select American retailers for reproduction. This Bonwit Teller ad from the April 15, 1925 issue of Vogue – evening dresses “reproduced exactly as presented by Chanel” – is another example of this trend. The dress on the left “with ruffled tiers and the new décolleté” was available in “black, blush pink, absinthe green or cocoa”. On the right, the “lace gown…with flange drapery [and] flower at back of shoulder” came in “black over black, or pineapple over flesh”.

The flapper style was not limited to the Crawleys and their peers who bought designer fashions or to the well-heeled American women who shopped at Bonwit Teller and other high-end stores. Department stores and mail-order catalogs aimed at the mainstream offered inexpensive and somewhat watered-down versions of the look.

Costume jewelry had recently come into its own as a desirable – even necessary – accessory, thanks to Chanel and Schiaparelli. They adorned their fashions with jewelry specifically designed to complement the clothing. In previous decades, women, other than the wealthiest, had a few good pieces, such as a strand of pearls, that they wore on special occasions. Now women in various income levels were choosing jeweled accessories for each ensemble in the same way they chose shoes and handbags.

Dangling, dazzling jewelry that moved with the body and called attention to the wearer was key to the look. Long strands of beads and faux pearls were worn in the usual way and also draped down the low back of an evening dress or across bare shoulders, or wound around the wrist to look like multiple bracelets. Other fashionable necklace styles included chokers, lariats, and fringe necklaces. Pendant earrings and multiple flexible (or line) bracelets, as they were called, were also important accessories.

For More Information on Fashion & Jewelry in the Series

Go from Day to Night with Vintage Jewels