Jewelry in the Movies: A 1940s Flexible Choker

Jewelry in the Movies: A 1940s Flexible Choker

Movies produced in the 1930s-1940s rarely credited jewelry. In fact, in many cases, the names of the costume designers weren’t even disclosed on-screen. For this reason, I always look closely at what the female characters are wearing in these films, hoping to recognize a jewel.

Last night while watching The Unfaithful, a 1947 film starring Ann Sheridan as a married woman who is involved in a murder, I noticed one of her necklaces. It’s the same type that Gene Tierney wore in Leave Her to Heaven, another married woman involved in a murder, released the previous year. The piece is what was then called a flexible choker. Let me tell you something about this style, which was very popular among 1940s necklaces.

Unlike the big and bold pieces – especially brooches – with large colored glass stones that I usually associate with 1940s costume jewelry, the components of this necklace were strictly metal. Even without embellishment, this design exemplified the Retro Modern style: curved with Machine Age characteristics.

Christie Romero describes this necklace as follows: “The flexible, slinky flattened gold tube, known variously as snake chain, gas pipe, or mouse tail, first exhibited in 1934, remained popular throughout the ‘40s”. I have seen this type of necklace also called a cobra in magazine ads.

The necklaces I saw in the movies were probably made from 14k gold, but one or both could have been costume pieces. And while I can’t tell you who made Sheridan’s or Tierney’s necklace – many companies produced this style – I can tell you about two possibilities.

Located in New York City, Walter Lampl’s slogan was “Creators of the Unusual as Usual”. Here’s their ad from the May 1947 issue of The Jeweler’s Circular – Keystone (a trade publication) showing the flexible necklace and a matching bracelet in gold-filled and sterling models, which cost the same. In the bottom corner is a gold-filled pin – embellished with stones in the color of aqua, rose, peridot, amethyst, topaz, or sapphire – that could also be worn on a choker.

Although I haven’t seen the pin that’s advertised, I can show you Walter Lampl’s flexible choker in sterling. You can read about it here. 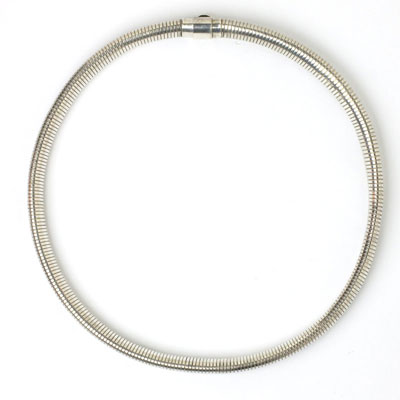 Forstner Chain Corporation in Irvington, New Jersey, offered a flexible choker and matching bracelet in 14k gold, as shown in this ad from the January 15, 1946 issue of Vogue. This company doesn’t appear in the costume jewelry history books, perhaps because they made both fine and costume pieces.

This style is a great example of the range of Forstner’s offerings of one design. In addition to solid gold, the company made a gold-filled version of this bracelet as well as gold-tone and silver-tone metal models.

Here are two versions of their flexible bracelet in 1/20-12k gold-filled. On the left is the same style as portrayed in the ad – you can see the detailed description and additional photos here. The bracelet on the right is a cuff with two spirals anchored in the center with a fixed-buckle detail – click here for more about this piece.

How They Wore It

Ann Sheridan wore her choker above the line of a round-neck dress along with hoop earrings. The overall effect is harmonious – round neckline, necklace, and earrings. And the necklace accentuates her face – she is the film’s star, after all! You can see the center of the choker showing in the above movie still. My Pinterest board has additional photos of this outfit with better views of the necklace.

Sheridan was dressed in The Unfaithful by William Travilla. He is credited with her wardrobe for another 1947 Warner Bros. film – Nora Prentiss. His name might not be well-known, but no one can forget the white-crepe, pleated dress with a halter top that Marilyn Monroe wore while standing on a subway grate in The Seven Year Itch. He designed it and many movie costumes for Monroe.

Kay Nelson, who worked as part of Charles Le Maire’s team at 20th Century-Fox, is credited with the costumes for Leave Her to Heaven. Tierney wears the necklace in at least three scenes.

In this photograph with her co-star Cornel Wilde, the choker sits below the round neckline of her dress. Again, the look is harmonious, although the necklace is farther from her face. In another scene, the choker is visible at her throat under a collared shirt with an open V-neck. I have to say I don’t like that look. My favorite is Tierney in a white suit with a green round-neck top – the necklace sitting right above the top’s neckline is more flattering.

You can see photos of the necklace with these other outfits – click here to see my Pinterest board.

For More about 1940s Fashions & Jewelry

Check out the 1940s on the Jewelry Styles by Decade page on this website. Read my article “Why 1940s Fashion is Making a Comeback with Women over 60” on the Sixty and Me website.

Brighten Your Mood with this Glittering Jewel