As we eagerly anticipate this year’s Academy Awards ceremony on February 26, many of us are as interested in what the stars will be wearing as who will win. And the dazzling jewels worn on the red carpet will get as much press as the gowns they adorn. So with the Oscars just days away, I want to tell you about Harry Winston, a name that is practically synonymous with Hollywood red carpet events today.

Did you know that his company was the first jeweler to lend diamonds to an actress to wear to the Academy Awards? That was back in 1944, and the borrower was Jennifer Jones. She won the Best Actress award for The Song of Bernadette, and Harry Winston became known as The Jeweler to the Stars.

My interest in Harry Winston was peaked when I learned that they designed a key piece of jewelry worn in one of my all-time favorite movies, Alfred Hitchcock’s Notorious.  Let me set the scene for the necklace and then tell you about it.

This 1946 thriller stars Ingrid Bergman as Alicia Huberman, the daughter of a convicted Nazi collaborator, who is, herself, a patriotic American. Following her father’s trial in Miami, Florida, she is recruited by federal agent T. R. Devlin (played by Cary Grant) to help him infiltrate a Nazi organization in Brazil. She is chosen because of her father’s connections and because she is viewed as promiscuous. (Keep in mind that the movie was made in the 1940s.)

Alicia accompanies Devlin to Rio de Janeiro, where the two fall in love, despite his misgivings about her character. Their happiness is interrupted when his colleague Paul Prescott (Louis Calhern) assigns Alicia to become romantically involved with Alex Sebastian (Claude Rains), to find out what he and his associates are manufacturing.

On the evening she is to attend a dinner party at the Sebastian home, Alicia (wearing an Edith Head-designed evening dress) meets with Devlin and Prescott beforehand. He opens a jewel case holding a luxurious diamond necklace rented for the occasion and puts it on her. 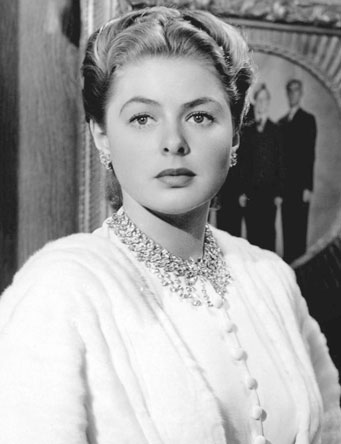 According to Hollywood Jewels (by Penny Proddow, Debra Healy and Marion Fasel): “Though there is no screen credit, the diamond necklace came from Harry Winston, whose trademark – leaf-shaped clusters of medium-size marquise, pear-shaped, and round diamonds – identified it. Here, the diamonds are set in flexible platinum mounts inspired by a holly wreath.”

In the 1940s, Winston and his designers “inspired by the geometry of nature…pioneer[ed] the innovative technique of clustering, in which the individual diamonds, not the metal settings, would dictate the jewelry design, therefore maximizing the brilliance of each gemstone” (quoted from the company’s website).

The Rest of the Story

The story continues with Alicia’s marriage to Sebastian, her ongoing contact with Devlin, her husband’s discovery that he’s married to an American agent, and the consequences of that realization. I won’t spoil the movie by revealing more of the plot, but I will promise that more spectacular jewels, a key as a significant prop, and an incredibly tender love scene await you. This movie poster says it all. 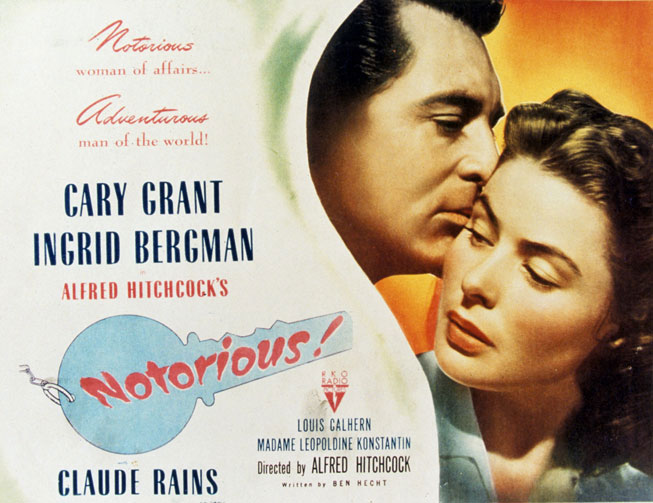 The Company & the Man

Gemologist and astute businessman Harry Winston (1896 – 1978) founded his company in New York City in 1932. Early in his career, Winston became known as The King of Diamonds because he acquired many of the world’s most famous gemstones. The first, in 1935, was the Jonker, a 726-carat uncut rough diamond, which renowned diamond cutter La Zarre Kaplan cut into 12 magnificent stones, including a 125.35 carat emerald-cut. Hollywood’s first connection to the company was MGM director Jacques Tourneur’s 1936 short film The Story of ‘The Jonker Diamond’. It recounted Jacobus Jonker’s 18-year quest in South Africa to discover a diamond that would ensure his fortune and dramatized Kaplan’s diamond-cutting process.

The company’s connection with Hollywood has continued to this day, with jewels featured in films such as The Graduate, Everyone Says I Love You, and How to Lose a Guy in Ten Days. And red carpet celebrities continue to be adorned by The Jeweler to the Stars.

Read more about the history of Harry Winston, Inc. on the company’s website. If you’re a fan of magnificent jewelry owned and/or worn by movie stars, I highly recommend the book Hollywood Jewels.

Jewelry in the Movies: Cartier Bracelets

Brighten Your Mood with this Glittering Jewel