As a long-time fan of Schiaparelli jewelry, I was delighted to see photos of the Maison’s haute couture show for spring 2020. And as one who first chooses the jewelry to wear when putting together an outfit, I was smitten when I read about artistic director Daniel Roseberry’s approach to his latest collection. In last month’s New York Times Style Magazine interview, he said:  “This season I found myself designing entire looks around a piece of jewelry, and it’s become a whole language of the collection”.

Inspiration from the Past

Roseberry’s muse was the avant-garde couturier Elsa Schiaparelli, who founded the Fashion House in her own apartment in 1927, before establishing a salon and atelier on rue de la Paix the following year. 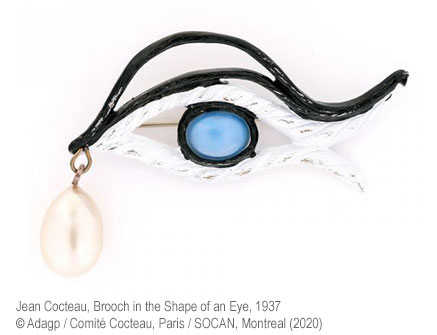 The brass earring with a digitally-printed enamel eyeball, shown in the photo above, was inspired by this brooch designed for her by Surrealist artist Jean Cocteau in 1937.

This eye motif appears in several other Roseberry designs: rhinestone chandelier earrings, brass buttons, brass earrings with pearl and rhinestone accents, the clasp on a bag, and eye-glass frames.

Roseberry’s jewelry continues Schiaparelli’s preference for costume pieces instead of fine jewels. She and her arch-rival Coco Chanel shared the belief that accessories were an integral part of their collections. Both promoted the acceptance of costume jewelry by their clientele. Their influence reached across the Atlantic and helped fuel the growth of that industry in the U.S.

The artistic director’s adoption of “Schiap’s” jewelry philosophy seems to have evolved, based on his comments to Alice Cavanagh in the New York Times interview:

‘“At first, I didn’t understand what the value of costume jewelry was, because these women can obviously afford the real thing,” Roseberry admitted in the atelier, referring to the House’s haute couture clientele.

“I also didn’t like the idea of making costume jewelry that looked like it wanted to be real,” he added, delicately holding up a pair of one-of-a-kind, shoulder-skimming chandelier earrings crafted from an assortment of trinkets, including another Schiaparelli totem, the brass padlock.

“But then I realized it could be a way to advance the message of the collection: we’re treating these accessories in surrealist, show-worthy ways.”’

Roseberry’s reference to Surrealism relates to the avant-garde artistic movement’s profound influence on Elsa Schiaparelli, who viewed fashion design as an art. Her silhouettes, materials, vivid colors and embellishments were innovative, unexpected, and attention-getting. Clientele included the Duchess of Windsor, Marlene Dietrich and Joan Crawford.

According to fashion historian Caroline Evans, “Her work was galvanized by the themes of masquerade, artifice, and play – themes that related closely to the changing status of women in the interwar years, as well as to the avant-garde discourse of the surrealist artists and their circles, some of whom she worked with in the 1930s”. 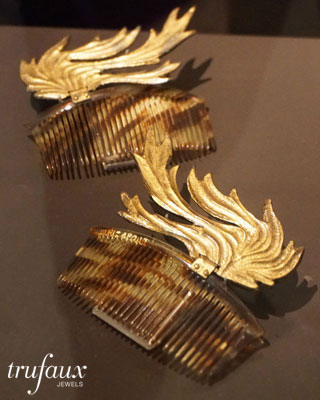 In addition to Cocteau, Schiaparelli collaborated with Meret Oppenheim, Salvadore Dalí and Alberto Giacometti, among others, on jewelry and couture design. Much of her work from this period is museum-worthy, which is why the early pieces are not available (or affordable) to the general public.

Fortunately, we can see examples in various museums around the world. This 1935 pair of tortoiseshell hair combs with gilt-metal ‘antlers’ is among the Schiaparelli designs currently on display at the Victoria and Albert in London.

World War II brought an end to much of the work of Parisian Fashion Houses. Schiaparelli’s avant-garde style was incompatible with the New Look introduced by Christian Dior in 1947. In 1949, she opened a New York-based company – Schiaparelli Jewels – and licensed her name for the mass production of costume jewelry designed in France and manufactured in the U.S. 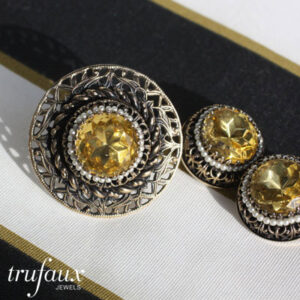 Though in-line with feminine 1950s tastes, the jewelry in this decade is still innovative. Distinctive glass stones in imaginative shapes and finishes, unusual color combinations, and bold designs characterize these jewels.

Here is one example that is as stylish today as it was then. This brooch and ear clips set features a large citrine-glass stone surrounded by tiny pearls, in an elaborate, antiqued, gold-plated setting. The faceting of each citrine – known as dentelle – forms an eight-pointed star.

Schiaparelli closed her Maison in 1954 and sold her perfume and accessory business in 1973.

Relaunch of a Legend

In 2006, Diego Della Valle acquired the archives and rights to the brand. He had to wait until 2012 for 21 place Vendôme, the home of the Maison since 1935, to became available. Marco Zanini, the first creative director, was succeeded by Bertrand Guyon.

Daniel Roseberry became Artistic Director in April 2019. In a press statement announcing his appointment, he connected his own artistic vision with the House’s founder: “One of her greatest legacies may be her commitment to fantasy, her understanding that we need fantasy in complicated times. I want to offer my own answers to these questions, and offer a fantasy – a dream – that feels relevant, and necessary, for today”. Clearly, Maison Schiaparelli will go forward with the same vision as its founder, who undoubtedly would consider him a kindred spirit.

For More Schiaparelli Jewels from Yesterday