Happily Ever After: Unique Wedding Jewelry by Hattie Carnegie

Happily Ever After: Unique Wedding Jewelry by Hattie Carnegie

If you were walking along East 49th Street in New York City in the 1950s, at number 42 you might have seen this diamanté-studded gold-tone mesh necklace with dangling pearls and crystal beads (shown above) in the window. That address was home to Hattie Carnegie Inc., a well-known fashion house that offered striking jewelry to compliment their tailored clothing. The necklace style illustrates Carnegie’s jewelry philosophy: “attempts to duplicate precious jewelers’ pieces miss the true purpose of costume jewelry – that such ornaments should be attention-getting, interesting, novel” (Women’s Wear Daily, July 24, 1942).

Fashion shows for the fall/winter 2019/20 season seemed to agree with this point of view, with numerous statement-making jewels walking the runways. I’ve also noticed a strong movement, especially among younger brides, towards vintage as an eco-friendly wedding fashion alternative. Because of these trends and because of the beauty, uniqueness, and versatility of Carnegie pieces, this month’s post focuses on several from the Vintage Bridal Jewelry collection.

The photo above shows the necklace adorning a wedding gown. Below on the left, we see this eye-catching gem worn with a simple cashmere sweater. 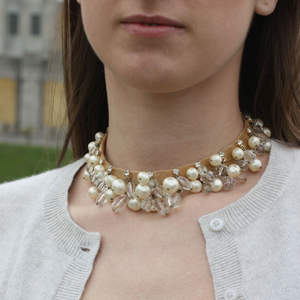 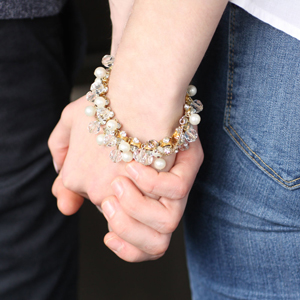 Carnegie produced numerous variations of necklaces and bracelets with a gold-tone mesh base in the 1950s. This design is the most lively and complex I’ve seen. It compliments the Pearl, Diamanté & Crystal Bead Bracelet shown above on the right. From the same period, this piece has pearls and crystal beads dangling from a triple row of diamanté set in gold-tone metal. Jangling jewels like these were very popular in that decade. You could wear this bracelet as a bridal accessory, or more casually, as illustrated here.

These Sapphire Aurora Borealis Chandelier Earrings are another great example of Carnegie’s philosophy. At 3 ¼” long, they are guaranteed to add glamour to your wedding ensemble. The term Aurora Borealis refers to an iridescent coating for rhinestones, developed by Daniel Swarovski and promoted by Christian Dior in 1955. These earrings flash shades of blue and purple as the light changes and the wearer moves.

These stunning ear clips can be worn with your wedding gown, either during the ceremony of after. Many brides who wear a traditional ensemble are changing their understated earrings to statement pieces for the reception. Others are shedding the princess-look altogether for a post-ceremony ensemble that better expresses her personality. Harper’s Bazaar has produced a lovely video with ideas for this approach: “Best Bridal After Party Looks”.

After the big day, wear this pair to dress up jeans or make another evening ensemble more memorable.

Red is the color of love, and ruby is a popular choice for wedding jewelry. This pair of Ruby, Diamanté & Pearl Dangle Earrings has large, faceted deep-red, teardrop-shaped pendants. They are capped with a ring of diamanté that sparkles when they move. Two faux pearls connect the drops to the ear clips.

Made in the early- to mid-1950s, these earrings are 2 ¼” long. I can see them at a winter wedding, worn by the bride in more traditional attire or by a bridesmaid dressed in velvet. Afterward, wear these pendants with day or evening attire.

As more and more brides are choosing to forego the traditional wedding veil because of its price and/or to create a more modern look, hair accessories have become a popular alternative. Have you ever thought about wearing jewelry in your hair? A brooch is just another version of an embellished barrette, and the former can be worn so many more ways than a headband or tiara.

With ropes of gold-tone metal forming a trio of pavé leaves, this beautiful pin could adorn an elegant hairdo that’s styled up (as shown below), down, or half-up. And after the wedding, wear this sparkly jewel to add elegance to an everyday jacket shoulder or lapel.

The Woman Behind the Brand

From her humble beginnings as an American immigrant without the ability to draw, cut fabric, or sew, Hattie Carnegie (1886 – 1956) built a fashion empire that began with custom designs sold in her own boutiques, first only in New York City and later also in Palm Beach. She then produced ready-to-wear collections for high-end stores such as I. Magnin and Neiman Marcus. With the goal of dressing women “from hat to hem”, the firm also created hats, cosmetics, perfume, and costume jewelry. The last was added to the company’s offerings in 1939.

Known as an editor, Carnegie set the standard for her fashion collections based on her innate sense of taste and style and her talent for hiring the right designers, including Norman Norell, Pauline Potter, Travis Banton, Claire McCardell, Jean Louis and Pauline Trigère. Customers were the elite of Hollywood and society: Gertrude Lawrence, Joan Crawford, Marlene Dietrich, Constance Bennett, and the Duchess of Windsor, among others.

Under her direction, some jewelry pieces were designed in-house while others were designed, produced, and stamped with the Carnegie logo by various manufacturers whose work was commissioned. One of those companies was Authentics Inc. (later known as Van S. Authentics), whose jewelry was designed by co-founder Joanne A. Moonan. Some sources attribute the design of jewelry to the clothing designers, but the accuracy of that information is uncertain. The work of Michael Paul, who was a jewelry designer employed by Hattie Carnegie during the 1940s, has been documented.

The Fashion Institute of Technology (FIT) in New York City mounted the exhibition “Hattie Carnegie: American Style Defined” in 1996. While no information is available on the museum’s website, you can read a review posted in the digital archive of the New York Times. A more recent blog post on the FIT website tells Carnegie’s story in “Hattie Carnegie: The Big Business of High Fashion”.

In 2016, a Hattie Carnegie hat and evening gown were part of the exhibition “Philadelphia in Style: A Century of Fashion from the Robert and Penny Fox Historic Costume Collection, Drexel University” at the James A. Michener Art Museum. You can see these pieces online: the 1960 hat and the 1940 evening gown.

For More About Hattie Carnegie

Jewelry On the Runway: A Modern Take on Vintage

How She Wore It: Amanda’s Story